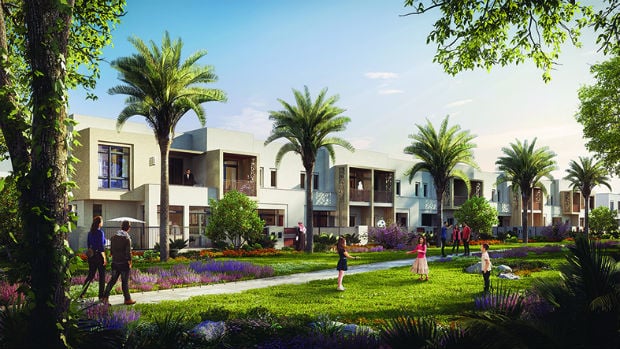 Dubai-based developer Nshama announced that it has awarded the construction contract for its Zahra and Hayat Townhouse communities within the mega Town Square development to Beaver Gulf Group.

Nshama launched the sale of units within the two communities earlier this year, with prices starting at around Dhs 1m for three-bedroom homes.

Within Zahra, the three-bedroom units are spread across 200 to 208sqm, while the four bedroom townhouses are sized at 225sqm. The townhouses have a private rear garden, room for domestic help, open bistro kitchen layout and covered garage.

Hayat consists of 730 townhouses in a mix of three and four bedroom units and will be centrally located within the development. Residents will have access to amenities such as community clubs with swimming pools, sports courts and children’s play areas.

Nshama said it received an “overwhelming response from end-user investors” for the “affordable” townhouses.

CEO Fred Durie said: “Town Square is now taking concrete shape with work on the project ongoing ahead of schedule. The contract with Beaver Gulf for the construction of the Zahra and Hayat Townhouses […] highlights our commitment to timely delivery.

“Both communities have gained tremendous response from end-user customers. The attractive price points of the two residential communities appeal to home-users who are seeking a value-shift from a rental-driven to own-home lifestyle,” he said.

Launched in February 2014, Town Square is set over 31 million sq ft near Al Barsha and features 3,000 townhouses and 18,000 apartments in total. It has been slated as a 10-year project, with roughly 3,000 units expected to be launched every year.

So far this year, along with the townhouses, Nshama has launched units for sale in Safi, a community that will feature studios and apartments, and over 300 units in Zahra Apartments.

Along with the residences, the Town Square development will also feature a 2.5 million sq ft retail precinct featuring over 600 stores and F&B outlets, a central square – the size of 16 football fields, a Vida Town Square Dubai hotel, a Reel Cinemas cineplex and open-air cinema.

Established in 2014, Nshama is one of the newest property developers in Dubai.