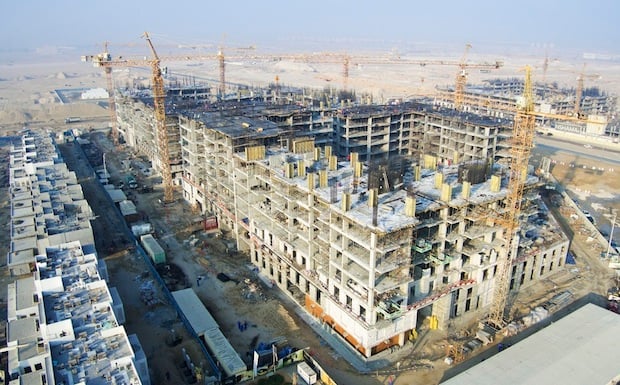 The 31m sqft mega Town Square development in Dubai, launched by Nshama, is on track to deliver more than 2,000 homes in 2017, the developer has said.

Construction contracts worth over Dhs3bn have been awarded to different entities for eight residential projects and for infrastructure work.

The infrastructure and related works are progressing “rapidly” with more than 5,000 workers on site, a statement said.

About 5,000 residences, as part of different neighbourhoods, are currently being built.

The Central Square – the size of 16 football fields, is also being developed. It will feature the Vida Townsquare Dubai hotel, a Reel Cinemas cineplex and a 2.5 million sq ft retail precinct featuring over 600 stores and F&B outlets.

Launched in February 2014, Town Square includes 3,000 townhouses and 18,000 apartments in total and has been slated as a 10-year project, with roughly 3,000 units expected to be launched every year.

Fred Durie, CEO of Nshama, said: “We are committed to delivering the homes as per schedule, in approximately a year from now. We are working with only the best-in-class contractors and consultants, who have accelerated their workflow using the latest technologies to ensure on-time delivery.”

Town Square will feature several residential apartments and townhouses – many of which have been sold out.

As of November, the execution of nearly one-third of all work for the 730 Hayat Townhomes has been completed. Similar progress was reported on Zahra Apartments, which includes 546 units.

The construction of the 320 Zahra Townhouses is nearly 65 per cent complete. The foundation and super-structure as well as deep and shallow services are complete and internal and external finishes are now progressing, while roadworks too have commenced, the company said.

Nearly one-fifth of the work on Safi Apartments, which feature 579 homes, has been completed, while excavation work on the first two zones for the 618 Zahra Breeze Apartments is also progressing as per schedule, the statement said.

The piling work for the 658 homes under Jenna and Warda is also nearly complete.

In terms of infrastructure, 2.5 million cubic metre of earthworks, 75 per cent of the sewer and storm water networks and 50 per cent of the potable water, irrigation, firefighting and telecom networks have been completed.

The initial road works package has been awarded to Binladin Contracting, who is also responsible for the construction of wet utilities.

UK-based Kier has begun construction of the integrated pump station serving the entire development, which is proposed to have a combined pumping capacity of 411 litre per second, built on a land area of 8,000 square metres.

About one-fifth of the work on the pumping station and main utility stations has been undertaken.

Emaar District Cooling, as the service provider, is building the district cooling system for Town Square.

The chilled water network construction is ongoing and 4km of the 6.2km network has been completed for the first phase.

The road network across the development is “progressing at an accelerated pace,” the statement added.