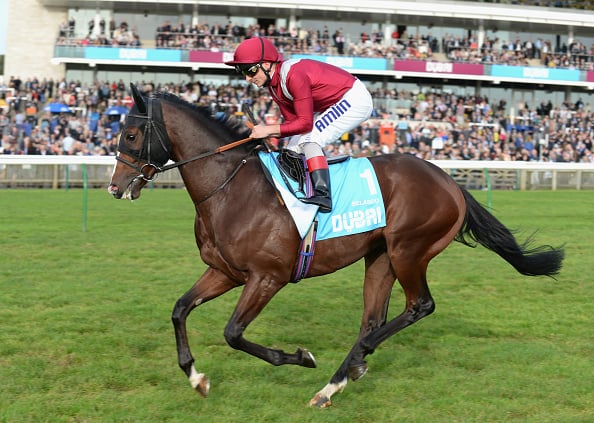 The son of French 2,000 Guineas and Derby winner Lope De Vega has proved to be one of the leading two-year-olds this year after squeezing through the pack to his Dewhurst two-length victory on Oct. 17.

“Belardo is a lovely horse, full of quality and we are delighted to own the horse in partnership with Prince Faisal,” said John Ferguson, bloodstock advisor of United Arab Emirates Prime Minister Sheikh Mohammed bin Rashid al-Maktoum.

“Prince Faisal has owned many great horses in the past such as Invincible Spirit and we feel that Belardo has a very exciting future at stud when his racing days are over,” he said on the stable’s website.

Godolphin did not disclose the size of the share or its price. The colt, who will now run in Godolphin’s blue silks, will continue to be trained by Newmarket-based Roger Varian, who has been looking after horses of several Gulf royals.

Representing Prince Faisal, bloodstock consignor Ted Voute, who purchased Belardo for 100,000 guineas ($169,460) as a yearling, said that the prince was delighted about Belardo’s prospects to eventually become a stud at Sheikh Mohammed’s Darley breeding operation.

“Prince Faisal and Sheikh Mohammed have known each other for many years and he was happy to sell the interest in Belardo knowing that he will remain very involved with the horse’s racing future,” Voute said.