Dubai’s Fireworks Record On NYE: All You Need To Know - Gulf Business 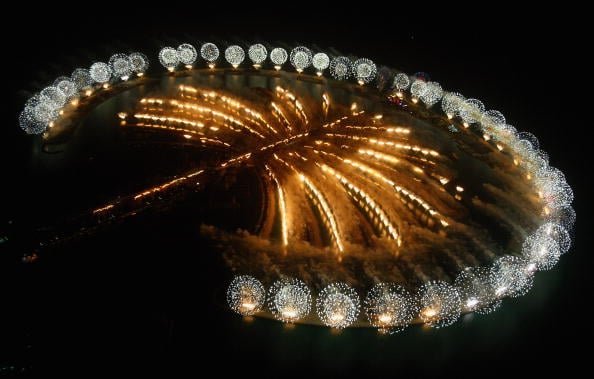 This New Year’s Eve, Dubai will attempt to break the Guinness Record for the world’s largest fireworks display, in a mega event at the Palm Jumeirah.

The record-breaking attempt will extend 100 kilometres over the seafront and will feature 400,000 fireworks set to a musical soundtrack specifically designed for the event. The display, lasting six minutes, will be visible from vantage points across Dubai.

Managed by around 200 pyrotechnicians, the display will have 400 firing locations along with 100 computers networked to control the show, Dubai Media Office said.

The fireworks will be fired from various locations around the Palm Jumeirah including the trunk road, the crescent road, the monorail and from the water between the Fronds in the crown area.

Police will be creating safety zones in these locations during the event.

Authorities have also issued directions on accessing the Palm on New Year’s Eve and have restricted visitors to those with event passes.

Residents can bring in guests through the passes issued to them, according to the event’s official website.

8.00 am to 9.00 pm: Access to event pass holders in their personal vehicles and in taxis.

10.30 pm to 1.00 am: All traffic will be stopped between this period. Provisions will be made for emergency situations.

Residents in the villas are advised to limit the number of guest vehicles to five per house since the parking space at the fronds is limited. All the vehicles will be issued a car pass.

Walking around Palm Jumeirah will be restricted from 10.30 pm onwards, in order to ensure the safety of residents and visitors.

Palm Jumeirah monorail operations will be suspended from December 26 to January 2, 2014.