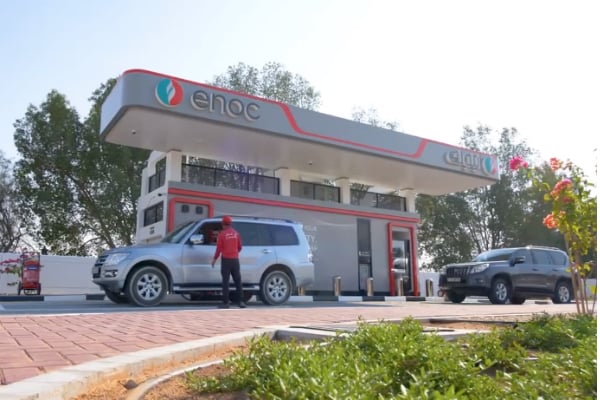 Dubai’s ENOC has launched what is claimed to be the city’s first portable petrol station.

The new compact concept has been running for five days in the in the Arabian Ranches community and so far delivered 12,000 litres of fuel.

ENOC said there were plans for three other stations at the Expo 2020 site and it could potentially be brought to other communities similar to Arabian Ranches, where the nearest fuel station is a 20-minute drive away.

The concept features one above tank fuel dispenser and a vending machine, with a solar powered canopy, vapour recovery system and a number of safety features. It can hold around 30,000 litres of Special 95 fuel and serve up to 400 vehicles per day,

ENOC said the station offered the latest mobile and RFID payment methods and can shifted to a new location in 30 days if needed.

“The growth in the number of UAE registered vehicles keeps pace alongside the growth in the country’s population. This is directly translated into greater demand for fuel stations in the years ahead,” said ENOC Group CEO Saif Humaid Al Falasi.

“The anticipated 25 million visitors expected to visit the UAE ahead of Expo 2020 Dubai presents a need in the market to innovate and offer our customers a new fuelling offering, which will serve areas where it is difficult to build new stations.”

ENOC said the stations could help it meet demand given Dubai’s population is expected to grow from 9.4 million to 10.41 million by 2020.

The company has more than 122 stations in the UAE after opening five this year. It plans to increase its fuel retail presence by 40 per cent by 2020.