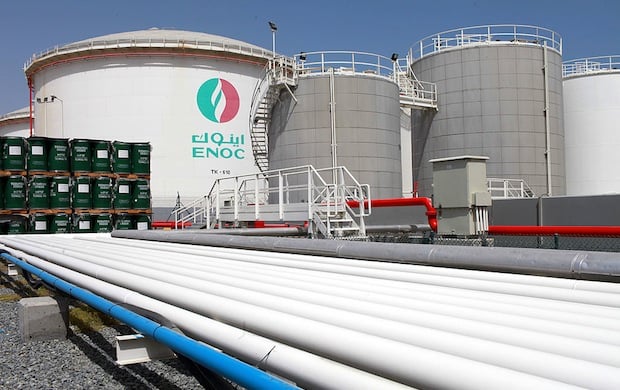 Dubai-based oil company ENOC Group signed an agreement with Rotary Engineering Fujairah for storage tanks as part of the $1bn expansion of its Jebel Ali refinery.

The new tanks are designed to store jet fuel, naphtha along with gasoline blend stocks.

They will be equipped with their own safety features, with dedicated firefighting systems integrated into the existing systems, a statement said.

The tanks will also be integrated into the port’s logistics systems and connected to the marine export facilities on the terminal jetties to ensure faster transportation of stored petroleum products.

Under the expansion programme announced in September, ENOC will expand the Jebel Ali refinery by 50 per cent.

The project comprises three separate packages and the main package will add a new condensate processing train to the existing facility, expanding its daily capacity to 210,000 barrels, up from its existing current 140,000 barrels per day.

Technip, which was contractor on the Jebel Ali refinery from 1997 to 1999, has already been awarded the engineering, procurement and construction contract (EPC) for the design and construction of the processing unit.

The expected date for commercial production is Q4 of 2019.

Saif Humaid Al Falasi, group CEO of ENOC, said: “Our $1bn expansion project at the Jebel Ali refinery is a key part of the UAE’s downstream strategy to be self-sufficient in domestic fuels, as well as expanding the slate of products on offer for export.

“The production capacity of our Jebel Ali refinery is 140,000 barrels per day helping to meet the requirements of local, regional and international markets. With expansion, we hope to achieve an increased capacity of 210,000 barrels per day. This will help us address the needs of the market and the wider industry, which has witnessed considerable changes in recent times.”

The second package of the expansion will also see the construction of a 31,000 square foot warehouse.

“The UAE’s energy demand is growing at about 9 per cent a year while Dubai’s population alone is expected to reach 3.3 million by 2021 from the current 2.5 million and then peak to 5.2 million by 2030,” said Al Falasi.

“This represents a 24 per cent growth by 2021 which in turn means that Dubai’s energy requirements will follow pace. As part of ENOC’s commitment towards the UAE and Dubai’s energy needs, we will continue to invest in key infrastructure projects to meet this constant growth.”

Originally commissioned in 1999, the Jebel Ali facility’s capacity was first increased in 2010 with an investment of $850m. In 2012, EPCL completed a debottlenecking project, further increasing capacity to 140,000 barrels per day.