Dubai's Emirates to fly only A380 jets to Spain | UAE News 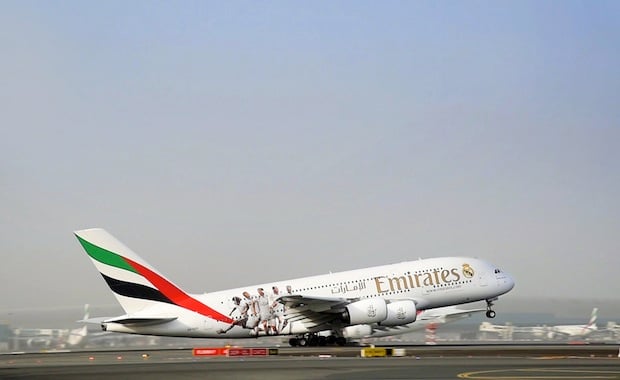 Dubai airline Emirates has announced that all of its flights to Spain will be operated by its flagship Airbus A380 jets.

Emirates’ other daily service to Madrid is already being served by an A380.

The new move will “significantly boost seat capacity” from Dubai to Spain, with total daily seat capacity reaching 2,044 in each direction, the airline said.

Emirates, a sponsor of the Real Madrid football club since 2011, also operates cargo flights with its freighter aircraft to both Barcelona and Zaragoza in Spain.

Through its SkyCargo division, Emirates transported over 70,000 tonnes of cargo from Spain in 2016 including: apparel, food products like fish and olive oil, pharmaceuticals and shoes – all bound for the UAE, Africa, Hong Kong, USA, Australia and Mexico.

Emirates, which is rapidly expanding its fleet, is the world’s largest operator of the A380 aircraft, with 93 of the double-decked aircraft in service and a further 49 on order.

It flies the jumbo jet to 46 cities and has carried nearly 70 million passengers on the aircraft since 2008 (as of February).

The airline is also undertaking a multi-million dollar cabin interiors upgrade programme which includes an enhanced onboard lounge for its A380 aircraft.

Read more: Video: Dubai’s Emirates to revamp A380 onboard lounge