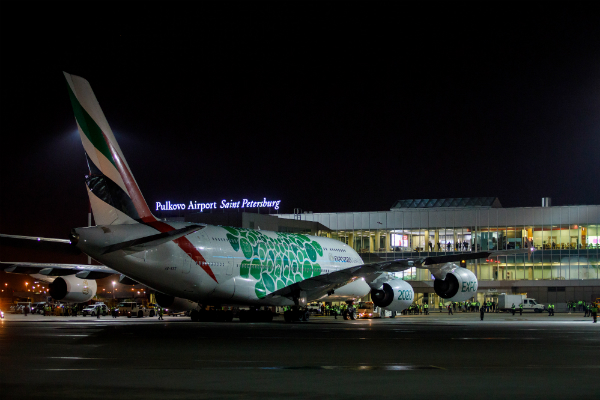 Dubai’s Emirates landed its first Airbus A380 in St Petersburg on Thursday as part of a temporary service to meet demand.

The superjumbo will temporarily replace the Boeing 777 operating the route from October 25-28.

During the period, the carrier said it would transport 2,350 passengers, with each flight offering 429 economy seats, 76 business seats and 14 first class seats.

“Should the airline decide to further use it on St Petersburg route for the peak periods or other occasions, Pulkovo team will provide the aircraft handling and passenger services according to Emirates highest standards,” he said.

The temporary Emirates A380 flights will be operating the EK175 schedule, departing Dubai at 3:45pm and arriving in St Petersburg at 8:50pm

Return flight, EK176 leaves St Petersburg at 11:55pm and arrive in Dubai at 6:55am the following morning.

Emirates, which is by far the largest operator of the A380, firmed up an order for 20 aircraft and 16 options in February after months of talks.