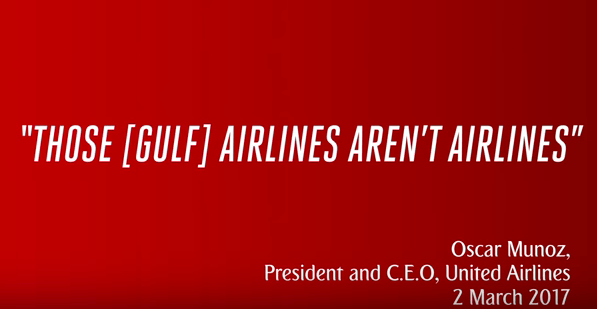 Dubai-based carrier Emirates has released a new video seeking to capitalise on the misfortunes of US rival United Airlines following a social media storm surrounding the violent removal of a passenger on an overbooked flight.

On Tuesday, United CEO Oscar Muoz issued a second public apology for the incident, which saw a Vietnamese-born 69-year-old man forcibly removed from a flight on Sunday for refusing to give up his seat for United staff.

The Emirates clip, released on Tuesday, opens with a quote from Munoz issued in March 2017 saying: “those [Gulf] airlines aren’t airlines”.

Videos of the violent removal of the man by aviation police at Chicago’s O’Hare International have been circulated across social media, with the incident also covered by major media outlets across the world.

He is seen being dragged down the aisle of Louisville flight UA3411 with a bloodied face after reportedly refusing to comply with airline staff, who asked him to leave.

@United overbook #flight3411 and decided to force random passengers off the plane. Here's how they did it: pic.twitter.com/QfefM8X2cW

United was reported to have offered passengers up to $1,000 and a flight the next day to give up their seats for four staff members prior to boarding but it is unclear why the airline then commenced the boarding process before the issue was resolved.

The man, named in the media as Dr David Dao, was among the passengers later randomly selected, based on ticket class, frequent flier status and check-in time, to leave the plane.

Yesterday, even White House press secretary Sean Spicer weighed in on the incident saying he was sure US President Donald Trump had seen the video.

“Clearly watching another human being dragged down an aisle, watching blood come from their face after hitting an armrest or whatever, I don’t think there’s a circumstance that you can’t sit back and say this probably could have been handled a little bit better, when you’re talking about another human being,” he was quoted as saying.

Nearly $1bn was wiped off United’s share value in trading on Tuesday following the release of an internal letter in which Munoz described the passenger as “disruptive and belligerent”. The company’s stock has since partially recovered some of these losses.

The man is still in hospital and has hired a personal injury specialist for a legal case, according to reports.

One of the officers involved in the incident was placed on leave pending an investigation.

The Partnership for Open and Fair Skies lobbying group backed by the three US airlines claims every American route launched by the Gulf carriers costs jobs and represents unfair competition.

The Gulf airlines deny the allegations and have issued data in an attempt to show their economic contributions to the country.