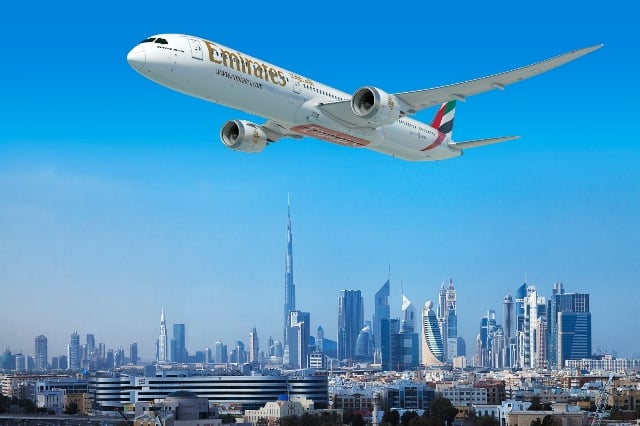 Emirates has placed a major order for 40 Boeing B787-10 Dreamliners worth $15.1bn, to drive its medium and long-haul network expansion. Deliveries are scheduled from 2022 onwards.

The news appears to draw a line under the A350-or-B787 order debates which have circulated for years and will be a blow to Airbus, with whom Emirates placed an order for 70 A350s at the 2007 Airshow only to cancel it in 2014.

HH Sheikh Ahmed said: “We looked at the two ‘apples’ and the management, planners and maintenance … concluded the B787 will be the best option.”

The -10 variant, which had its first flight in March, typically holds 330 passengers.

Sheikh Ahmed added: “Emirates’ orders today will be delivered from 2022, taking the airline well into the 2030s. Some of these will be replacements so that we maintain a young and efficient fleet, and others will power our future network growth. We see the 787 as a great complement to our 777 and A380 fleet, providing us with more flexibility to serve a range of destinations as we develop our global route network.”

Kevin McAllister, president and CEO for Boeing Commercial Aeroplanes, said: “We are excited that Emirates has selected the Boeing 787-10 Dreamliner to power its fleet expansion and future growth.

This is an aeroplane that will set a new benchmark for operating economics in the commercial aviation industry when it enters service next year. Emirates’ endorsement of the 787 Dreamliner extends our long-standing partnership and will sustain many jobs in the United states.”

Emirates is evaluating engine options for its Dreamliner order.

The agreement includes conversion rights to switch the aircraft to 787-9s, offering the airline additional flexibility for its future fleet and global network.

Emirates’ Dreamliners will be delivered in a mix of two and three-cabin class configurations, potentially seating between 240 and 330 passengers.

The carrier recently reported a significant increase in profitability for the first half of its fiscal year after a tough period that saw it challenged by less corporate travel demand and currency fluctuations.

It previously announced an order for 150 Boeing 777X aircraft at the 2013 airshow.