Dragon Oil, an exploration and production platform totally owned by the Government of Dubai, has renewed the partnership contract in Turkmenistan with the state-owned company, Turkmen Oil. This is extended until May 2025, for a period of ten additional years with a total value of $1bn.

$500m will be paid in cash, while the remaining $500m will be paid over the next 13 years, which includes the company’s commitment towards the support of the Turkmen government’s projects, community development, education, public health and some benefits of the co-production.

The signing ceremony of the agreement was held in the Turkmen capital, Ashgabat, with the presence of Ali Al Jarwan, CEO of Dragon Oil, and a few members of the company’s executives. 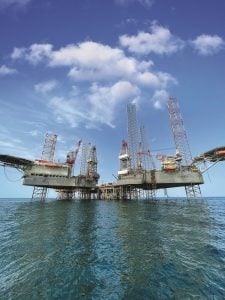 The company’s investments, during the contract extension period, are expected to reach another $7-8bn to support expansion and development programmes, while future production levels would range between 60-70 thousand barrels per day. The cumulative production of crude oil is expected to reach 350 million barrels until the year 2035.

Saeed Mohammed Al Tayer, MD and CEO of Dubai Electricity and Water Authority (DEWA) and Chairman of ENOC and Dragon Oil, expressed his delight at the announcement of the extension of the partnership contract, which confirms the company’s solid commitment to strengthening its presence in Turkmenistan.

Ali Al Jarwan, CEO of Dragon Oil, stated, “We welcome the signing of the contract extension agreement, which represents a constant commitment by Dragon Oil towards its profitable investments in the oil and gas sector in Turkmenistan,” adding that the agreement will allow offering more investments and completion of plans to increase the production capacity of the company.

Over the past decade, Dragon Oil has evolved from a single-origin oil and gas company operating in Turkmenistan only, to a global operator and an international exploration and production platform, with production and exploration assets in Egypt, Iraq, Algeria and Afghanistan.