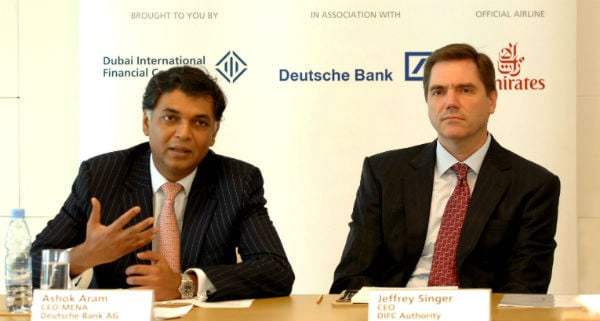 Dubai is to stage a new international forum designed to act as a platform for business leaders from Asia, the Middle East and Africa to discuss doing business in the region.

In a joint initiative between Dubai International Financial Centre and Deutsche Bank, the DIFC Forum will hold its inaugural meeting under the patronage of HH Sheikh Maktoum bin Mohammed bin Rashid Al Maktoum, deputy ruler of Dubai and president of DIFC, on the 21st November this year.

The event will be an opportunity for the leading business minds from the MENA region and Asia’s southeast coastline, to debate and share their expertise of doing business.

The first forum will be held under the theme ‘The Shifting Centre of Gravity’ and will focus on the opportunities and challenges in growth markets as global financial dynamics shift to emerging economies.

Jeffrey Singer, CEO of DIFC Authority, said: “The shifting centre of gravity has various implications for businesses in the region and around the world.

“The surge of a new wealthy middle class in many Middle Eastern and Asian countries and the rise of the Renminbi as a global currency…set against a political backdrop of the on going regional tremors from the Arab Spring, the change of leadership in China for the next 10 years, the upcoming US elections and the Eurozone governments’ response to regional debt issues…these are the conditions that gave rise to the DIFC Forum.”

The Forum, which will take place at DIFC’s Ritz-Carlton, will also focus on Dubai’s role in facilitating emerging trade flows and supporting regional expansion.

Ashok Aram, CEO of Deutsche Bank, MENA, said: “Despite the challenging global situation the MENA region continues to offer steady growth prospects…we are happy to support one of the leading financial forums in the MENA region.

“We are deeply committed to the Middle East,” continued Aram. “The way we viewed Asia in 2002 we now view the Middle East the same. We are very excited about this emerging shift in gravity.”