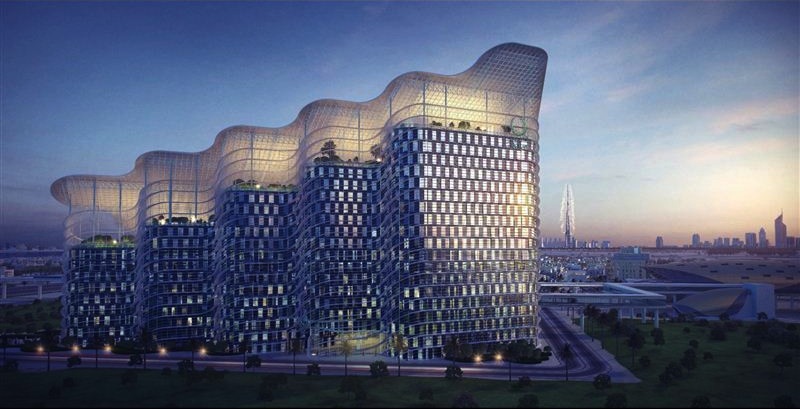 Dubai Electricity and Water Authority (DEWA) has awarded a Dhs46m contract for the first phase of the construction of its new headquarters, called Al-Sheraa.

Located at the Cultural Village in Al Jadaf, Al-Sheraa will be the tallest, largest, and smartest government net zero energy building (ZEB) in the world, according to DEWA.

It will have 16,500 sqm of photovoltaic solar panels on the roof to produce over 3,500KW of energy. The building will also include 2,000 sqm of building-integrated photovoltaic panels.

When ready, the building will generate an estimated 5,800 megawatt hours (MWH) of renewable energy per year.

The total energy used in the building in a year will be equal to or less than the energy produced on site during that year. Al-Sheraa will also use 50 per cent less water than regular buildings.

To be a ZEB, employees will manage their energy consumption using a smart app that will inform them of the amount of energy they use.

A control centre will also keep track of the building’s systems and switch on lights and air conditioning when it is not in use.

Designed to resemble the UAE’s traditional houses, Al- Sheraa will have a sail design over an open courtyard that will feature trees and plants.

The building will also utilise smart technologies such as internet of things, big data, open data and artificial intelligence solutions.

Robots will provide cleaning and security services and a smart app will alert employees of the time they should leave home based on traffic.

This app will also enable employees to book parking spaces and meeting rooms.

Other features will include a fitness centre, shaded outdoor jogging track, 700-seat auditorium, parking for 1,500 cars, a nursery for 80 children, library, cafeteria and retail area.

DEWA’s new headquarters will also be directly linked to Dubai Metro by a covered bridge. The link with the Al Jadaf metro station will also promote the use of public transportation to reduce traffic and carbon footprint, the statement said.

The building is designed to accommodate 5,000 employees, as well as customers and visitors.

It is slated for completion and inauguration in the last quarter of 2019, DEWA said.

“By building Al-Sheraa, we want to establish a role model in Dubai and the world to achieve a balance between development and the environment,” said Saeed Mohammed Al Tayer, managing director and CEO of DEWA.