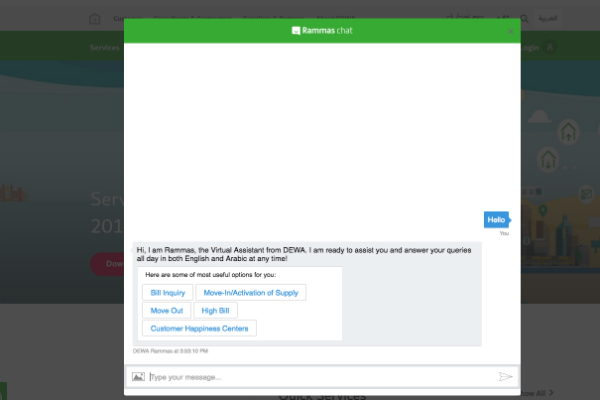 Dubai Electricity and Water Authority (DEWA) has announced that its artificial intelligence (AI) chatbot has reached a new milestone after answering more than 270,000 customer enquires since it’s launch in January.

According to DEWA, the chatbot, Rammas has responded to more than 204,000 enquiries on the authority’s website, 67,000 on their smart app, 3,000 through Facebook and 528 enquiries through Amazon’s Alexa system.

Rammas operates on a 24-hour basis in both English and Arabic, offering high quality service with minimal effort. It also has the ability to answer countless questions in a record time, said DEWA.

The organisation categorises the chatbot as a virtual employee and says it can “learn and understand the needs of customers, according to their enquiries”.

“Rammas analyses these based on available data and information, and takes action to accurately answer most queries,” DEWA said.

The emirate’s authority claims to be the first public government entity to use AI to respond to customer enquiries in real time.

Managing director and CEO at DEWA, Saeed Mohammed Al Tayer, said that the authority is working in line with the directives of the Ruler of Dubai, Sheikh Mohammed bin Rashid Al Maktoum, to reduce the number of visitors to the emirate’s government offices by 80 per cent by 2018.