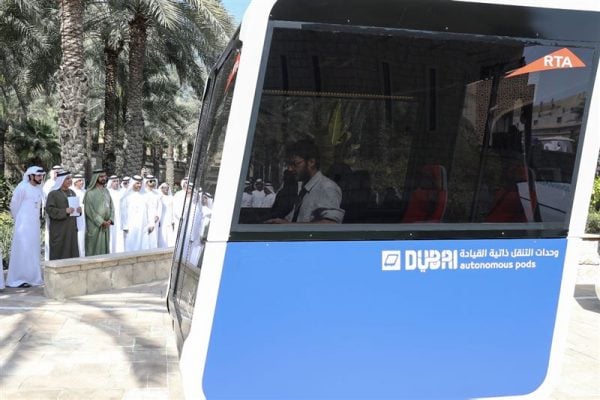 Dubai’s Roads and Transport Authority (RTA) has conducted initial tests of autonomous transport pods under a partnership with US technology firm Next Future Transportation.

The NX1 pods are designed to travel short and medium distances in dedicated lanes at an average speed of 20kph and can be coupled in 15 to 20 seconds or detached in five seconds.

Each measures 2.87m in length, 2.24m in width and 2.82m in height and weighs about 1,500kg. They have a capacity for 10 riders, with six seated and four standing, and can operate for three continuous hours before a six-hour recharge.

Onboard 3D and ordinary cameras help each pod avoid accidents.

“The prototypes of these units are manufactured in Italy and shipped to Dubai for trials. These pods run on a virtual pre-configured and programmed lane and are overseen by the operational system,” said RTA director general and chairman Mattar Al Tayer.

Sheikh Mohammed has directed that 25 per cent of journeys in the emirate are autonomous or driverless by 2030.

On Tuesday, the RTA also launched a challenge for self-driving vehicles with $5m of prizes for entrants from international companies, start-ups and universities.