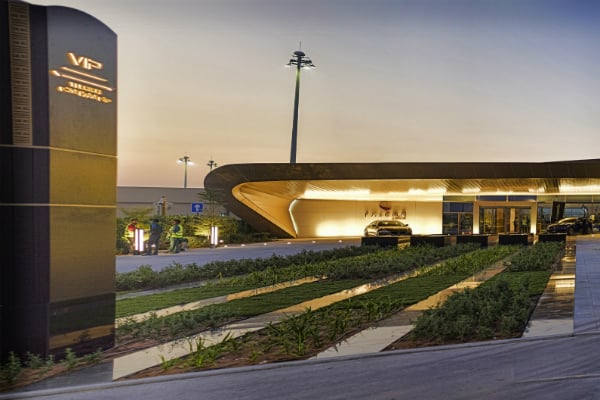 Claimed to be the largest purpose-built facility of its kind in the world, the facility is being marketed with privacy and retail as its core attractions with a number of high-end products on sale.

“A significant milestone for Dubai South and for aviation industry as a whole, the opening of the VIP Terminal will cement our position in the world of private aviation, bringing us a step closer to becoming the region’s premier aerospace hub,” said HH Sheikh Ahmed Bin Saeed Al Maktoum, chairman of Dubai Civil Aviation Authority and chairman and CEO of Emirates Airline and Group.

The 5,600-square-metre facility includes solid oak paneling, louvered screens coated in a bronze and gold metallic finish and a 1000-piece post-modern chandelier in the main hall.

Three fixed base operators are currently operating at the VIP terminal – Falcon Aviation, Jetex and Jet Aviation – and the first private jet took off from the facility in April.

Dubai South’s 7km aviation district, including Al Maktoum International Airport, is designed to become the new home of private and business flights in the emirate.

Research firm WINGX said at the MEBAA Conference earlier in December that year to date departures from Al Maktoum were up 37 per cent to 763.

In comparison, a lack of slots saw departures at Dubai International grow only 2 per cent to 564.