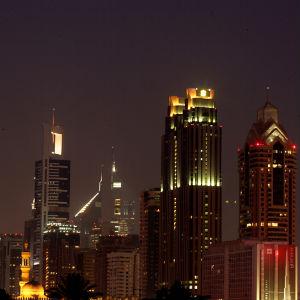 Given the low interest rate environment in many developed markets, investors desperate for returns have flooded into a number of different emerging market assets.

“The reason why there is so much interest is because there is double-digit growth in there,” Levitt told reporters at a media event on tourism in the Gulf Arab state. “If you have got a whole bunch of investors moving into that type of asset class, you soon create an oversupply which becomes an issue.”

While future oversupply in the serviced apartments sector was a concern, yields should be supported by Dubai’s thriving conference industry and demand from those seeking refuge from regional troublespots. “The anticipation is there won’t be a major correction,” Levitt said.

After being hit by a burst real estate bubble and the global financial crisis in 2008, leading to debt problems at state firms, Dubai has shown renewed vigour in recent months, with big new projects announced.

At the heart of the revival has been Dubai’s traditional strengths of tourism and logistics, as well as its status as a safe haven in a politically volatile region.

“With regional unrest, people are coming to Dubai where they might have gone to other locations in the past,” said Susan Potter, group director, hospitality, for MKM Commercial Holdings which runs Dubai’s Wafi complex, among other interests.

“A lot of families prefer to stay in apartments if they are going to be here for a period of time.”