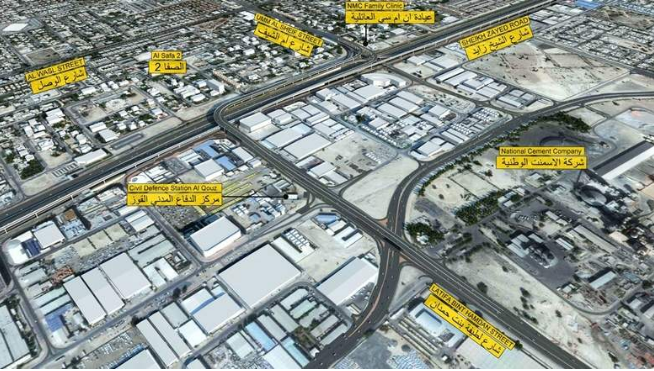 Dubai’s Roads and Transport Authority has awarded a Dhs 482m contract for a multi-level road project in the emirate to upgrade the Al Wasl and Jumeirah Streets.

The project will extend from Al Safa Interchange up to Al Manara Interchange on Sheikh Zayed Road. It is expected to be completed in the first quarter of 2018, the RTA said in a statement.

The project will link Jumeirah Street with Al Khail road and parallel roads (Al Asayel, First Al Khail Road) through two-level bridges and roads. These will run from Umm Al Shaif Street in the direction of Sheikh Zayed Road up to Latifa bint Hamdan Street and from Al Zomorrud Street to the East up to the Sheikh Zayed Road.

The new bridges will be constructed up and down the Red Line of the Dubai Metro without affecting the operation of the metro, confirmed RTA’s director general and chairman Mattar Al Tayer.

The two bridges will be linked with the Sheikh Zayed Road through ramps enabling free exit points.

“The project comprises the construction of a flyover on Latifa bint Hamdan Street intersecting the First Al Khail Road, a signalised at-grade junction underneath the bridge, and the improvement of the intersection of Umm Al Sheef Street with Al Wasl Street,” said Al Tayer.

“The project also includes the construction of key surface roads, improvement of service roads and landscaping works all along the Sheikh Zayed Road in the sector from Al Safa Interchange to Al Manara Interchange as well as at Umm Al Sheef Street, Latifa bint Hamdan Street and Al Zomorrud Street,” he added.

The number of lanes in the diversion will correspond to the same number of the existing lanes in order to avoid any “negative impact” on traffic volumes and extra congestion or delay in construction, Al Tayer said.

“The contractor’s work area will be entirely separated by a high barrier to reduce the disturbance of road users to the minimum,” he added.

The new project is a part of the RTA’s masterplan for upgrading the network of roads, bridges, crossings and tunnels to accommodate the growing traffic movement and improve mobility throughout Dubai.

The plan aims to develop “integrated solutions of roads as well as land and marine transport networks that are safe for users, compatible with the comprehensive development plans, address the needs of demographic expansion and contribute to sustainable development and investment in the emirate,” said Al Tayer.

Dubai is hoping to attract 20 million visitors to the emirate by 2020 as part of its tourism strategy. The city is also anticipated to welcome 25 million visitors during the six-month long World Expo, which runs from October 2020 to April 2021.

Several infrastructure projects have been planned in the city to cope with expected demand.

Last year, Al Tayer announced that around 35 projects worth Dhs 30bn will be completed ahead of the expo.