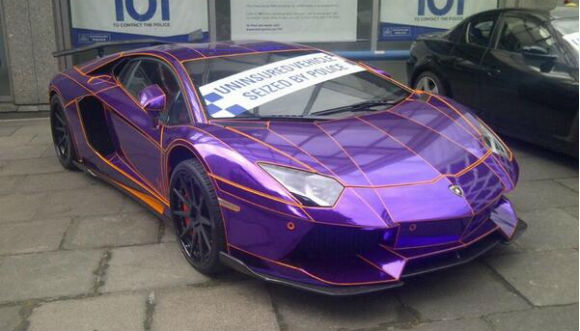 Two Lamborghini supercars with Dubai number plates have been seized in London this month after their owners failed to have them insured.

Last Wednesday a silver Lamborghini Aventador was swopped on by police as it parked outside Harrods, the luxury retail store owned by Qatar and popular with wealthy Arabs.

For the Metropolitan Police, who patrol England’s capital city, impounding high-performance vehicles from the Gulf has become a regular activity in recent years as the number of Middle East tourists has risen.

Earlier this summer the London constabulary even used a Lamborghini for promotional purposes to warn wealthy drivers of the risks of not insuring their vehicles.

A metallic purple Aventador with orange trim was placed outside the police’s headquarters, New Scotland Yard, after its driver did not have a licence or insurance.

With rocketing summer temperatures in the Gulf, escaping to Europe’s big cities with the promise of cooler temperatures and greener landscapes has become a popular retreat for many in the Middle East.

In London last year, Saudi visitors were up by 22 per cent year-on-year while visitors from the UAE were up 10 per cent.

With the rise of wealthy visitors though comes a rise in traffic offences, although London’s authorities often struggle to collect fines due.

In previous years a Dubai-registered Rolls Royce racked up 18 tickets for parking offences amounting to £2,000 (Dhs11,500) while a Lamborghini Murcielago, also from Dubai, was slapped with 24 tickets.