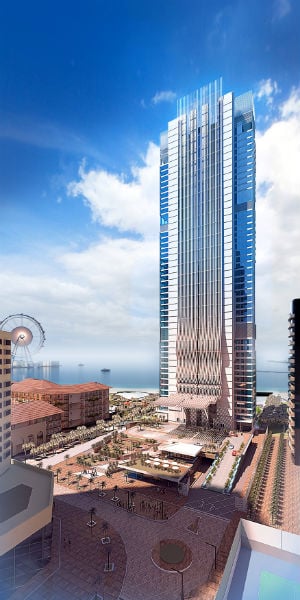 Dubai Properties has announced that it will launch 1/JBR, a luxury residential tower at the Cityscape Global exhibition this week.

Located at the entrance of Dubai’s Jumeirah Beach Residence, the tower will offer “unparalleled luxury” with every apartment offering sea views, the developer said.

JBR. one of the destinations in Dubai that was developed by Dubai Properties Group, has a promenade that stretches 1.7 km overlooking the Arabian Gulf. The development is also a hugely popular tourist destination, receiving over 12 million visitors in 2014.

The project is scheduled to be completed and delivered by early 2019.

Dubai Properties did not reveal details about the project but said that the tower will comprise of two to four bedroom apartments and five bedroom penthouses.

The tower will also have private access, with no more than three to four residences per elevator lobby and penthouses on the top‫ ‬two levels. Selected residences will also include provision upgrades for private pools, the developer added.

“1/JBR will appeal to discerning local, regional and international investors, who are looking for the highest specification residences in one of the most vibrant destinations in the country. 1/JBR redefines the concept of elegant living,” said Dubai Properties chief executive Abdullatif AlMulla.

The launch comes even as Dubai’s property market see a slow down in sales.

According to a Q2 report by consultancy JLL, residential prices were down 8 per cent on average since June 2014.