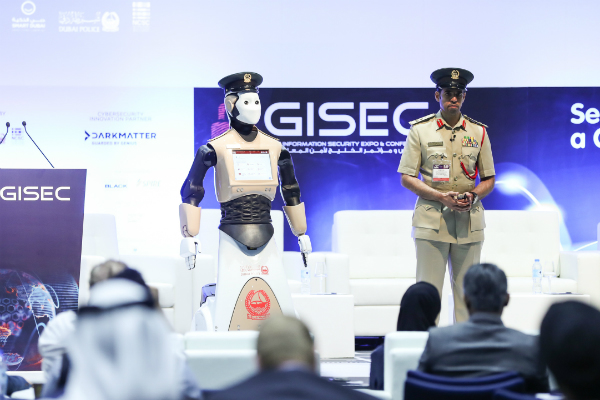 Dubai’s own version of Robocop is to begin patrolling in high-density areas of the city after being unveiled at a conference this week.

Dubai Police announced that the world’s first robot police man would officially join the force today, having been a regular feature at technology exhibitions in the emirate in recent months.

The autonomous officer, which stands 170cm tall and weighs 100kg, is equipped with an emotion detector that can read emotions and facial expressions and adjust greetings accordingly.

It can also recognise gestures and hand signals from 1.5m away and includes a built-in tablet that can be used to pay fines and answer questions.

It can communicate in six languages, chat, interact and respond to public queries, shake hands and perform a military salute.

Previous versions used IBM’s Watson cognitive computing system, although it was not specified if this was still the case.

“With an aim to assist and help people in the malls or on the streets, the Robocop is the latest smart addition to the force and has been designed to help us fight crime, keep the city safe and improve happiness levels,” said brigadier general Khalid Nasser Al Razzouqi, director general of smart services at Dubai Police.

“The launch of the world’s first operational Robocop is a significant milestone for the emirate and a step towards realising Dubai’s vision to be a global leader in smart cities technology adoption.”

Dubai Police said the robot would patrol the Gulf Information Security Expo and Conference at Dubai World Trade Centre until Tuesday evening before beginning patrols in the city.

Officials said robot officers could eventually make up 25 per cent of the emirate’s police force.