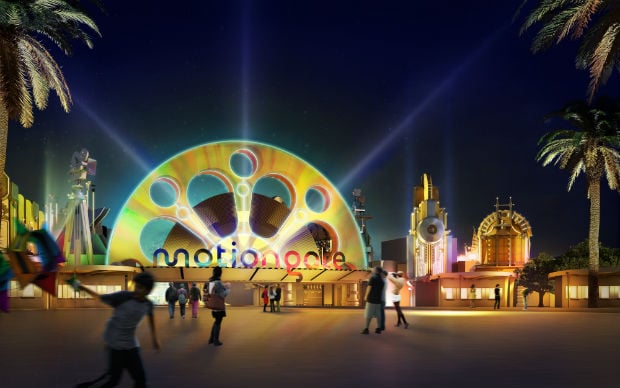 Dubai Parks and Resorts, a Meraas Holding company developing a mega theme park project in Dubai, announced that it has started construction of DreamWorks’ zone within its Hollywood theme park Motiongate.

DreamWorks’ zone has been designed as an enclosed steel-based structure built on approximately 730,000 sq ft of land within the four million sq ft Motiongate Dubai. The park is scheduled to open in the third quarter of 2016.

The company said that work has begun on the steel structure, which has a total capacity of approximately 53 million cubic feet. The structure requires around 5,400 tonnes of steel that have been fabricated into approximately 77 main trusses.

Presently, two 600-tonne crawler cranes have been deployed to lift each truss and track into place, marking a milestone for the development of the park, the statement said.

“The smooth and seamless coordination with DreamWorks Animation has resulted in significantly accelerating the pace of the entire destination,” said Raed Al Nuaimi, CEO of Dubai Parks and Resorts.

“DreamWorks’ zone will house 12 engaging attractions and new-generation rides, as well as character-themed dining and retail outlets based on popular animated feature films such as How to Train your Dragon, Shrek, Madagascar, and Kung Fu Panda. All under one roof, the zone would be large enough to fit the equivalent of eight football fields.”

Motiongate Dubai will host four zones in total featuring about 27 attractions along with retail, dinning, and entertainment options.

Aside from Motiongate, Dubai Parks and Resorts will comprise of two major theme parks- Bollywood Parks Dubai and Legoland Dubai.

Scheduled for completion in 2016, the project is expected to attract five million visitors in its first year of operation.