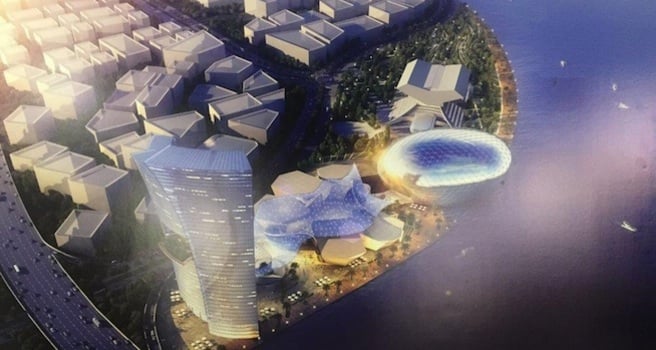 Dubai Municipality has awarded a Dhs 1.8bn contract to develop its new Convention Centre (Arena) project in the emirate, it was announced on Sunday.

The project was approved by His Highness Sheikh Mohammed bin Rashid Al Maktoum, Vice President and Prime Minister of the United Arab Emirates and Ruler of Dubai last month.

Located in Al Jaddaf, the project is spread across an area of 55,000 square metres, facing Dubai Festival City.

Targeted towards supporting the World Expo in Dubai in 2020, the project features three buildings as well as a huge conference hall. It will also include the Mohammed Bin Rashid Library.

The Sheikh Rashid Hall for conferences, spread across 190,000 square feet and rising 30 metres in height, will have a seating capacity for 10,000 people. Designed like a theatre, it will be able to host international conferences, seminars, meetings, music concerts and theatrical shows.

The main hall is divided into three levels and will include five sub-halls that can each accommodate up to 1,000 people.

The halls will also be linked to the hotel buildings and offices through a glass corridor called the Concourse building.

The fully covered and air-conditioned corridor is designed like a boulevard with shops and restaurants. It will be 25 meters high, 150 meters long, and have an area of 50,000 square feet.

The overall project will include two hotels: A 33-storey three-star hotel spread across an area of 250,000 square feet and a 410,000 sqft four-star hotel comprising 48 floors.

The ground floor of the hotels will be dedicated for commercial use.

A third 36-storey building within the project will house offices.

Parking lots, located in the basement, will be able to accommodate 1,800 cars.

The project is expected to be completed in two years.

Dubai Municipality director-general Hussain Nasser Lootah said the project will “directly contribute” to improving the status of Dubai on a global level.

The project will prove to be “a special architectural icon” that will be added to the list of touristic projects in Dubai, official news agency WAM quoted him as saying.

He also said the Arena project is one of the largest projects that will be carried out by the department for Expo 2020.

Some of the other major projects unveiled last month by the Dubai Municipality include a 100-hectare Safari Golf project, a Vertical Industrial City, a sports project called Dubai Stairs and a new Hardware and Bicycles market.