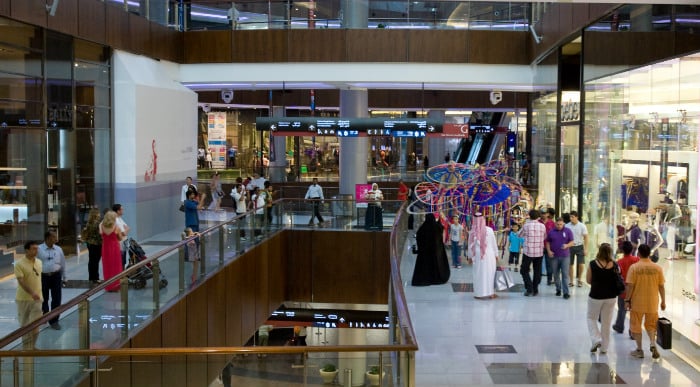 The mall, which had an average monthly footfall of 6.25 million last year, claims that it has remained the world’s most-visited destination for the third consecutive year.

“The number of visitors significantly surpassed the number of shoppers at the world’s other leading malls such as Mall of America and Bullring Birmingham, UK (40 million each), Intu Trafford Centre, UK (30 million), Part Dieu Lyon, France (29.4 million) and West Edmonton Mall, Canada (28 million),” a statement from the mall’s developer Emaar Properties, said.

Over 40 per cent of the visitors to the mall were tourists, with the majority of overseas visitors coming from Saudi Arabia and the GCC, China, India, Russia and Europe.

The mall’s 1,200 plus retail outlets also recorded a 26 per cent year-on-year rise in sales during 2013, and according a report by Bain, more than 50 per cent of all luxury goods sold in Dubai were purchased at Dubai Mall.

“The socio-economic impact of the mall on Dubai’s economy is tremendous, having generated more than 25,000 jobs and consistently driving the growth of the city’s retail, leisure, and hospitality sectors – the core contributors to Dubai’s GDP,” he added.

Nasser Rafi, CEO of Emaar Malls Group, said: “The surge in visitor arrivals and the growth in retail sales are indicators not just of the popularity of the mall but also of Dubai as a preferred destination for shopping and luxury lifestyle experiences.

“We are now further enhancing the fashion and lifestyle choices at the mall with the expansion of the Fashion Avenue by another one million sq ft, which will add 150 new brands to the mall.”

The mall, part of the $20 billion Downtown Dubai development, celebrates its fifth anniversary of opening in November this year. Along with retail outlets, it features 200 plus F&B outlets, the Dubai Aquarium & Underwater Zoo, indoor theme park SEGA Republic and the Dubai Ice Rink.