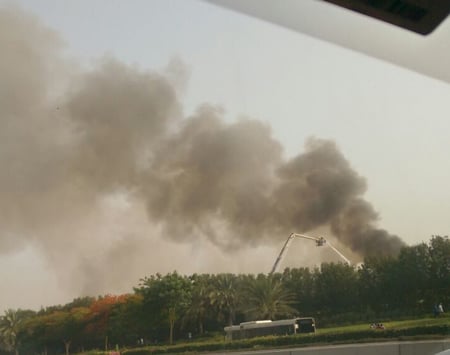 At least 15 shops, two cars and four bedrooms were damaged when a large fire broke out in Dubai’s Umm Al Ramool industrial area near Festival City on Tuesday morning.

Dubai Civil Defence said the blaze started at 5:58am and was attended by firefighters from the Al Rashidiya, Al Ghusais, Al Quoz, Port Saeed and Al Karama stations.

“There were no injuries but there was a lot of damage, which included four workshops, 15 stores, two cars and four bedrooms that accommodate labourers,” said a Dubai Civil Defence spokesperson.

No injuries were reported and the fire was under control and in the cooling phase by 8:44am.

Black smoke was seen hovering over the area this morning.