Dubai Gears Up For Next, More Modest Boom - Gulf Business 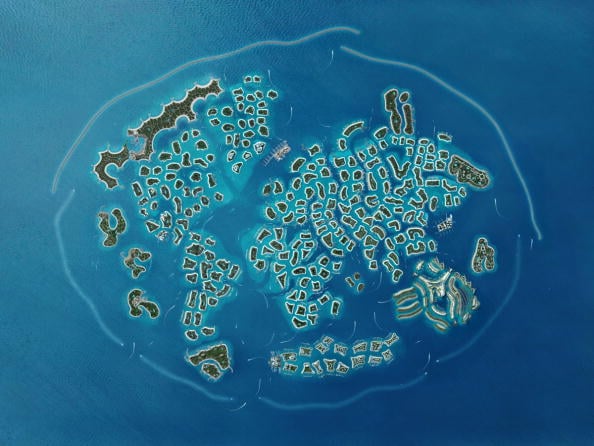 Four kilometres off the coast of Dubai, more than 200 tiny, man-made islands bake under the sun. Built five years ago, they were to be one of the emirate’s most spectacular projects, an archipelago of resorts and luxury housing laid out in the shape of a world map.

Apart from a few facilities such as a villa and a beach club, the islands are empty. After creating them at a cost of hundreds of millions of dollars, state-owned property firm Nakheel sold about 70 per cent of the land. But most of the buyers have lacked the cash or the will to go ahead with development plans.

A little over three years after a corporate debt crisis drove it to the brink of default, Dubai is still littered with relics of the disaster, in the form of unfinished real estate projects and battered balance sheets.

But it is laying the groundwork for another economic boom, based on its role as a tourism and business hub for the surrounding region, and a haven for money from India, China and fast-growing countries in Africa.

The next boom is likely to be more gradual, partly because financing will not be as cheap and plentiful as it was during the excesses of the last decade. Growth will depend more directly on services that Dubai provides, rather than on the ability of its real estate market to suck up money.

But in some ways, the next boom could rival the last one, boosting Dubai’s population about 50 per cent by the end of this decade and pushing it deeper into a range of industries, from food processing to diamond trading.

Florence Eid, chief executive of London-based research and advisory firm Arabia Monitor, said some aspects of Dubai, such as its role as a relatively safe financial centre, were set back by the crisis and shown to be weaker than assumed.

“But some have actually been strengthened in the last few years, including its role as an operating base for businessmen from around the region and as a centre for entrepot trade, which it has enjoyed since the pearl fishing and spice trading days of the Arabian Gulf,” she said.

“The economy now appears to be embarking on another wave of growth during which it will serve similar functions as Hong Kong and Singapore in Asia, supporting and profiting from growth in industry and trade in a large region surrounding it.”

Dubai’s expansion plans are striking in that they are being announced while the emirate is still many years away from working through the debt pile it accumulated during last decade’s boom and bust.

Standard Chartered estimates $48 billion of bonds and loans will mature between 2014 and 2016, including about $10 billion of restructured debt at state-owned Dubai World and Nakheel. Some of this debt might have to be restructured a second time, the bank said in a research report.

In December, Moody’s Investors Service downgraded its credit ratings of three Dubai banks, including the largest, Emirates NBD. It cited concern about problem loans and said it was prepared to cut the ratings further.

But Dubai’s ruler, Sheikh Mohammed bin Rashid al-Maktoum, signalled a push for growth in November, announcing plans for a huge tourism and retail development including the world’s largest shopping mall, over 100 hotels, and a park 30 per cent bigger than London’s Hyde Park.

Since then a string of state-owned and private firms have said they are reviving projects mothballed during the crash or launching new ones. Plans even include more man-made islands: last month state-backed Meraas Holding said it would spend $1.6 billion to build an island housing the world’s largest ferris wheel, just a few kilometres from Nakheel’s archipelago.

Hotel industry consultancy STR Global estimates, based on its contacts with companies in the industry, that Dubai hoteliers plan to add 19,000 new hotel rooms in the next few years – almost a third of the current number of about 63,000.

The government’s central projection is for the population to rise above 3 million people by 2020 from just over 2 million at present. Under an “aggressive” growth scenario, the population could be near 4 million by the end of the decade, it estimates.

Since fewer than 20 per cent of Dubai’s population are local citizens – the vast majority are expatriate workers – such growth would mean an influx of hundreds of thousands of people.

Construction work to accommodate them would require billions of dollars of fresh financing that may be hard to obtain in the wake of the global financial crisis. If growth does accelerate, it could produce the same kind of boom-and-bust cycle that plagued Dubai a few years ago.

“There are certainly legitimate questions to be asked about investment risk in Dubai, given the wild swings in the property market and the boom period’s long record of broken promises, which extend to the highest levels,” said Jim Krane, author of the book “City of Gold: Dubai and the Dream of Capitalism”.

But there are grounds to think Dubai’s ambitions are feasible – or at least a large part of them. One of the emirate’s advantages is its geographical location, which lets it serve as an air transport hub between Asia, Europe and Africa; Dubai overtook Hong Kong to become the world’s third-busiest airport for international passenger traffic last year.

Double-digit annual increases in this traffic, which hit 58 million passengers last year, are helping Dubai attract growing numbers of tourists and investors. About a fifth of passengers leave the airport and come into the city; local industries are lobbying the government to raise this ratio with changes to visa arrangements and other steps.

“The way Dubai has worked in the past few years, they’ll create enough demand generators to make sure they have customers for the new hotel rooms,” said Naureen Ahmed, manager of analysis at STR Global.

Taxes in Dubai are lower than in many European and Asian cities. This helped boost foreign direct investment flows into the emirate by 17 per cent last year – a rapid rate during a period of global economic weakness.

The more difficult financing environment since the global crisis could also benefit Dubai in a way, by preventing the wild investment that characterised the last boom.

With loans harder to obtain, real estate developers are likely to be forced to build their projects in stages, ensuring each stage is viable before moving to the next one.

This may mean some of the projects announced in the last several months are delayed for many years, or never built at all – but the overall effect could be to support Dubai’s growth by making the economy more stable.

Loic Pelichet, assistant vice president for research at regional investment firm NBK Capital, said one factor in Dubai’s investment decisions would be whether its bid to host the World Expo 2020 is successful. A decision on which country will host the fair is expected this year; local officials have estimated the event could draw 25 million visitors to Dubai.

At some point, growth in the air travel industry will slow, affecting the whole economy through the retail and hospitality industries. But the emirate is not close to reaching that point, so its ambitions are reasonable, Malas said.

“You have to have a vision that is ambitious. If I set the target high and I hit 75 percent of it, I’m happy. If I set it low and achieve it year after year, I will never have strong growth.”