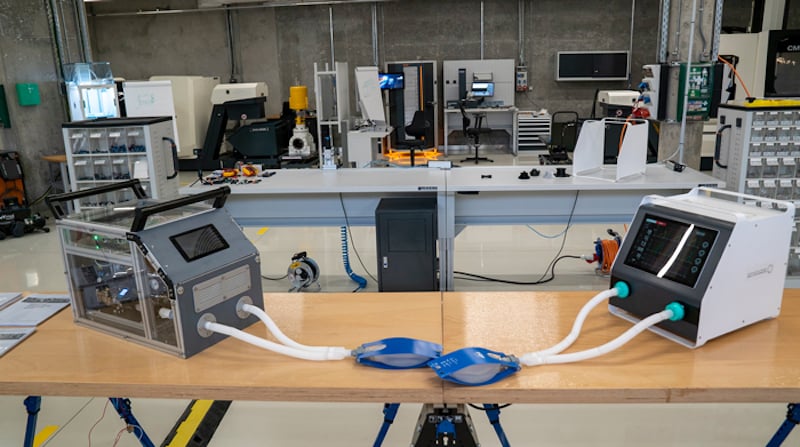 “Over an eight-week period, the project team worked relentlessly to design and build the M061 ventilator system as a modular and scalable prototype, relying on interchangeable components that are easy to source and integrate, in an effort to circumvent the world-wide scarcity of crucial medical supplies,” DFF said in a press statement.

The project was a result of a partnership of different entities within the emirate including DFF, Office of Minister of State for Artificial Intelligence, Dubai Covid-19 Command and Control Centre, Ministry of Health and Prevention, Dubai Health Authority, Mohammed Bin Rashid University of Medicine and Health Sciences, among others.

The interdisciplinary team comprised of local and international engineers too, programmers, industry experts and healthcare specialists.

Our newly announced mechanical ventilator project, M061, is a testament to our efforts to support frontline healthcare workers in the UAE as they seek to safeguard the lives of those affected by COVID-19.#DubaiFuture #FutureForesight #Health #Ventilator pic.twitter.com/NRp9pcDmfY

They studied existing ventilator designs and identified functionality and durability as two key elements that would define the M061 ventilator.

The team designed and tested prototype medical ventilators systems that could provide oxygen to patients for longer periods and efficiently adapt to changes in vital indicators such as blood pressure, heart rate and temperature.

The M061 prototype was designed to address the individual needs of patients by delivering multiple modes of ventilation in the pressure and volume mode families, along with further assistive and supportive functions, based on the patient’s breathing capacity.

The prototype, which consists of a mechanical airway made of tubes, fitted with various valves, sensors and filters, is capable of providing invasive and non-invasive mechanical respiratory assistance with the aim of sustaining respiratory support for both short- and long-term periods.

“The prototype is intended to support, rather than replace, existing hospital ventilators that have broader medical applications and are designed to last for significantly longer durations,” it added.

Plans are now in place to execute a rigorous testing cycle, under the supervision of pulmonary specialists and clinicians in hospitals in Dubai, to ensure that the ventilator system complies with international requirements.

Khalfan Belhoul, CEO of DFF, said that the prototype is “in line with its sustained efforts to support frontline healthcare workers in their efforts to safeguard the lives of those affected by Covid-19,” and was, “initiated and implemented under the directives of His Highness Sheikh Hamdan bin Mohammed bin Rashid Al Maktoum, Crown Prince of Dubai and Chairman of the Executive Council of Dubai, and Chairman of the Board of Trustees of the Dubai Future Foundation, to address the urgent need for large numbers of mechanical ventilators that play a crucial role in treating patients with severe symptoms of Covid-19.”