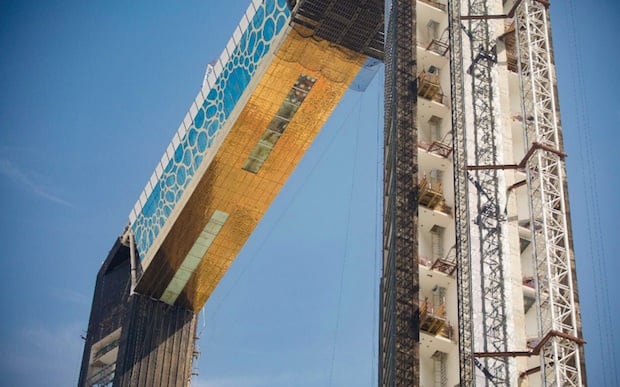 Fernando Donis, the Mexican-born architect who won the international competition to design the Dubai Frame, is suing the Dubai Municipality, he has confirmed.

Donis has filed an intellectual property lawsuit in the US against Dubai Municipality, claiming that he never signed an agreement with the Municipality to use the design for the project and that it was built without his involvement.

Developed by Dubai Municipality, the Dhs160m Dubai Frame project – designed to look like a giant window frame – was originally slated to open in 2015. The project is currently nearing completion, according to officials.

Dubai Municipality first held an international design competition for the project in 2008, which was sponsored by elevator manufacturing company ThyssenKrupp AG.

The brief was to “design a new emblematic structure for Za’abeel Park in the center of Dubai to promote the new face of Dubai”, according to Donis.

He also provided Gulf Business with what he alleges is a copy of the competition agreement, which also states that subject to approvals, Dubai Municipality may “engage the winner to prepare the final design and documentation of the winning proposal”.

“Having sent cease-and-desist letters and exhausted all avenues of communication with the Dubai Municipality and ThyssenKrupp AG, we decided to bring a copyright infringement case,” he added.

The Dubai Frame is presently being clad in gold – an element that was not part of the design submitted by Donis.

But he claims that the project being built “copies” the unique elements of his design.

Donis confirmed that the Dubai Municipality did propose a contract to him on January 21, 2013.

“The contract limited our role to that of an “advisor”, required us to give away our intellectual property in the project and forbade us from ever promoting our practice through the Dubai Frame Project. We never signed this blatantly unfair contract,” he said.

Donis added: “We trust the highest authorities of Dubai and the UAE will properly solve this unprecedented situation in the history of UNESCO-UIA regulated architectural competitions.”