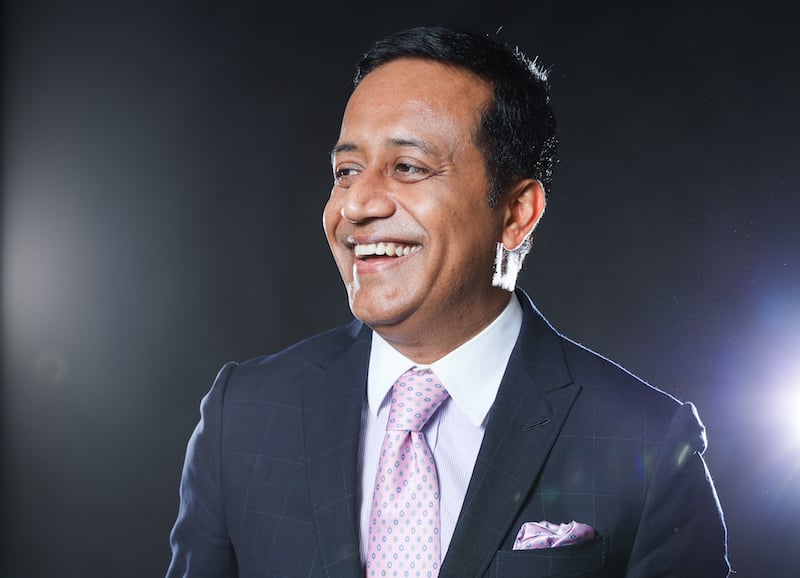 There’s a lightness to Shailesh Dash as he arrives to the Gulf Business office. A broad smile and a warm handshake sets a relaxed tone as he jokes his way through an entertaining photoshoot, showcasing his sharp and engaging character before we even begin to discuss his multi-billion-dollar investment career.

But don’t let the entrepreneur’s jovial nature fool you. Several snaps and a cup of coffee later – as we sit to discuss the progress of his various investments, his views on the region’s economy and investment landscape, and his key advice to budding business leaders – his ready wit is matched by a steely focus. A seriousness that has clearly served him well since launching his first business, Al Masah Capital, in 2010.

Prior to striking out on his own, Indian national Dash had built a stellar reputation in the region’s financial sector with Kuwaiti firm Global Investment House. As head of strategic investments and research, and later managing partner of the company’s alternative investment arm, Global Capital Management, Dash helped build the fiduciary side of GIH. But when major defaults by the treasury team in late 2008 and 2009 forced the company into a large-scale restructuring process, Dash knew it was time to move on.

“I did lose quite a bit of my stock options at that point in time, and we decided – me and the team – that we are not going to put our career or our hard work on the line only for somebody else to lose it,” he explains.

“We decided that we should put all our strength and skill set experience into creating something that we were responsible for. So we moved from Kuwait to Dubai – the land of opportunity, I must say, particularly for expats – and we started a company known as Al Masah Capital with several reputed investors and benefactors from the GCC and Asia.”

The rest, as they say, is history. The advisory, consulting and fundraising firm was only the tip of the iceberg for Dash, who has since added Regulus Capital Limited, Future Capital Limited, Avivo Group, Al Najah Education, Diamond Lifestyle and Gulf Pinnacle Logistics to the long list of businesses he has founded for several investors, and expanded the businesses from Dubai to other parts of GCC, Europe, Africa and Asia.

These varied financial institutions and services companies invest in the Middle East and South East Asia across industries such as healthcare, education, logistics, F&B, financial services, and more.

And with more than 90 transactions executed at a value of $500m, plus several other investment products and solutions worth more than $1.2bn provided to several clients, success seems to come naturally to Dash, his shareholders and his more than 100 employees.

True to his entrepreneurial DNA, however, the businessman is not resting on his laurels, but looking ahead at where the next opportunities will be found.

“I’m trying to involve myself more in new ideas, new strategies, while the businesses and day to day operations are managed by the respective CEOs and their teams,” he says.

“I’m trying to see where we could potentially be useful in the different needs of society. We started off doing this in 2011 by promoting healthcare – moving on to education and logistics later, and then F&B retail.

“But we’re now looking into the new needs of the economy – moving into FinTech and other things which potentially could be the need of the hour.”

The shift in Dash’s approach is in parallel to the shift in the wealth management landscape, he explains, with the market “going through significant changes worldwide”.

“Historically it has happened that you have suitcase bankers from Europe or Asia who come over and take billions of dollars out of the region into different parts of the world. This is okay because the oil wealth needs to find diversified products and people need to diversify their holdings. But it’s important to have a part of that wealth at least invested in the region to make these economies real economies, moving away from the dependency of oil.

“Wealth management plays a very, very important part of that by creating different products, or different associations or relations with institutions where you can be part of the growth of the real economy. And this is where I will try to focus myself as we move forward into different segments, whether that’s to do with security, FinTech, new economy companies, or whatever other needs there may be.

“We are investing heavily into technology today. We have invested into a FinTech company in the UK, and we are setting up a technology hub back in India, for example.”

Dash’s forward strides are certainly confident ones, and they echo his confidence in the region’s appetite for investment, despite economic headwinds.

“Let’s put it this way, the number of millionaires and billionaires has been on the rise, they’ve not declined,” he says.

But he warns that for the region to build on this appetite and boost capital inflow, more needs to be done to make local markets attractive. And alongside that, a stronger middle class must be developed.

“Saudi to a certain extent has a strong middle class, but I can’t say that for any other economy in the Gulf, which has been based primarily on oil wealth. So I think we all have to work towards that.

“You need a sizable population – in the millions and millions – which should be in the Dhs25,000 to Dhs50,000 pay bracket. That’s where most of the lack in population is, I think.

Even with a population growth, and the emergence of a middle class, Dash explains that challenges would still exist.

“There are many positive developments that have been done by the government, but the rest of the world is also changing, and we all are competing for the same amount of capital,” he says.

“Capital will move wherever it sees the best opportunity… and the whole world is trying to attract that capital. So we have to keep ourselves changing and offer the best. We need to change ourselves to the current requirements of these wealthy investors and see as to how we can attract that money into the UAE as well.”

Dash admits that adapting to change is easier for his organisations than some others due to their size – “when you have fewer cooks in the kitchen, it’s easier to move forward and do something” – but he adds that the cooks in question only have as much flexibility as the options in front of them allow.

He uses this metaphor to highlight the importance of attracting a wider range of investments to the region. Not just the multi-billion industries that “everybody wants”, but also “those $10m-$50m industries that could make the UAE their home”.

His reason? Innovation. Dash argues that bringing innovative industries to the region now will reap great rewards in the coming years. But he is quick to point out that the right infrastructure must be developed first.

“You have to create the right banks, right financing structure, right regulation, so that they feel secure and stable to stay in this part of the world,” he says.

He admits that there is an element of risk involved – both for the investors and entrepreneurs – but states his belief that the region is prepared to shoulder that risk.

“You have a lot of young, good-minded entrepreneurs who are willing to take that risk. And there are investors – though very few of them – that are also taking that extra risk.

“And that’s why you see successful investments coming through such as Careem and Souq. Those people were pioneers – they looked ahead to doing something, and they have achieved it and have done very well. There are other such companies in the pipeline, too.

One way to boost the quality of start-ups and SMEs in the region is for those who ‘have been there and done that’ to offer entrepreneurs the benefit of their experience.

And for Dash that experience is twofold, having both launched his own business, and invested in others.

So what advice would he give budding entrepreneurs?

“Many times you see that people have very, very good ideas, but to walk that extra mile and make those ideas successful, implementation is key. A great idea is one thing, but you have to make it commercially successful, and that’s a whole other playing field.

“For that to happen, you need to have some very good people around you who will support you in that particular ecosystem. You will need to have a financier for the first two or three years while you are fortifying your idea into a concept and then into a real business. And then you have to really work hard to spread it out commercially and make it a successful model.

“In terms of financing, you will not have the normal financing companies or backers who will do that for you. You have to find people who have a certain mindset to be investing into these industries.”

Finding these backers is not always a straightforward task, and even when you get in front of them, pitching your idea can be a nerve-wracking experience. For Dash, entrepreneurs should keep in mind one important thing: concept is key.

“Obviously if people are good looking, and they have good communication skills, it always helps to get their ideas across. But the people who invest, they know how to identify a good opportunity,” he says.

“People who have made money in the really hard working way, they know what they’re looking for; they know how to choose which product, or which guy to bet on. Communication skills alone are not going to make you successful, even though it is an advantage. It will be the concept and its implementation commercially that make you successful. And also the hard work and the skill set you have.

A self-confessed introvert himself, Dash admits that raising money for investments was often a frustrating experience, speaking to “thousands of people and getting rejected most of the time”.

But he adds that the important thing is to keep going and make improvements whenever you can.

“It’s a continuous process of improvement that you go through, and you learn through life, always. They say success never teaches you anything, failures do. We had our own share of failures, which helped us to learn and have the experience to move forward.”

And since the birth of Al Masah Capital in 2010, and the various companies that followed, moving forward is exactly what Dash and his team have been doing.

Today, he confirms that consolidation is a key part of their progress, “focusing on the current economic environment and trying to help improve the performance of the existing investments we’ve done”, as well as looking for new ideas, and exiting from certain investments.

But there could be geographic growth on the cards too. Having moved into Singapore five years ago, Dash says he is now looking to invest in Malaysia, and elsewhere.

“We would love to do things in Vietnam, Indonesia, Thailand, the Philippines,” he says.

“And we are looking to do more in Africa as well. We have a lot of investors from Africa, who have been constantly asking us to replicate in Africa what we have built here.

“So we are going to play a bigger role in building businesses in Africa and South East Asia, for sure. As well as in the Gulf, which is our home.”

It’s a bold statement of intent from Dash, but given the success of his ventures so far – not to mention the ever-upwards trajectory of his 24-year career (to date) in alternative investments – you would be remiss to bet against him fulfilling his ambitions.

And there’s a good chance he’ll do it with a smile on his face, too.