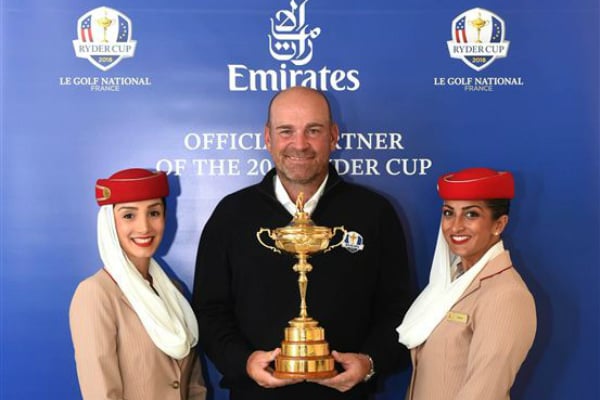 Dubai airline Emirates has announced its sponsorship as an official partner of golf tournament the 2018 Ryder Cup.

The deal is a renewal of the carrier’s existing European Tour Agreement, which will run until 2021.

The 2018 Ryder Cup will be held at Le Golf National in France in September 2018, will host 24 of the top golfers from Europe and the USA.

Emirates said the agreement renewal would mean its continued sponsorship for the existing nine European tour events culminating in the DP World Tour Championship in Dubai.

“A wonderful local story that will be heard around the world and have a global impact. They last sponsored the The Ryder Cup in 2010 at Celtic Manor and it is significant that they are back on board for next year’s event.”

Emirates president Sir Tim Clark said the partnership would allow the airline to engage with “millions of golf fans around the world”.

The airline currently supports 19 events on the Europe Tour International Schedule, as well as the Race to Dubai.

“The 2017 European Tour will feature the ninth edition of the Race to Dubai, the winner of which will be crowned European Number One at the end of the season.”

The reigning champion of the Race to Dubai is Sweden’s Henrik Stenson.

Emirates is also well represented in other sports including football, where its name appears on the shirts of clubs including English side Arsenal , Spanish side Real Madrid and France’s Paris Saint-Germain.

Earlier this month, the carrier also renewed its sponsorship of the English FA Cup tournament until 2021 in a move worth a reported GBP9m ($11.5m) a year.