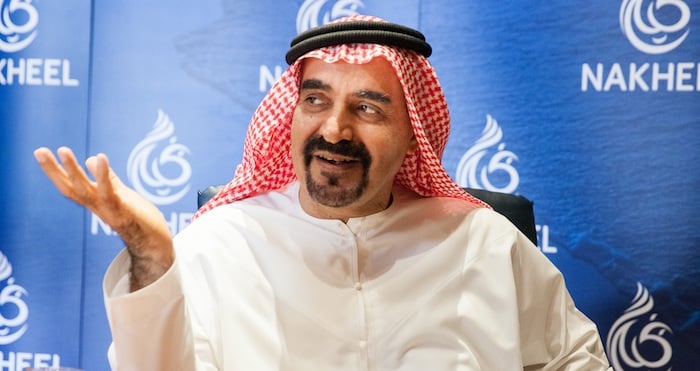 Lootah, who took on the position in 2010, has resigned following an invitation from Sheikh Ahmed bin Saeed Al Maktoum to assume a new position with the Dubai World board, a statement said.

Al-Shaibani currently serves as the executive director and CEO of the Investment Corporation of Dubai, which has holdings in major Dubai entities including ENOC, Emirates Group, Emirates NBD and Emaar Properties.

“Nakheel has managed under the stewardship of Ali Lootah and his years of dedication to steady its course and return to profitability,” he said.

Nakheel also announced further changes to its board, with other new members including Sultan bin Sulayem, Khalifa Al Daboos and Issam Galadari. They will be appointed as directors to the board in addition to the current directors, Khalid bin Bakhit Al Falasi, Ibrahim Hussain Al Fardan and Adel Khalifa Al Shaer.

Nakheel prepaid Dhs7.89 of its bank debt in 2014 – four years before the scheduled repayment date.

In August 2016, the company said it had repaid all its debts after having made arrangements to repay its Dhs4.4bn trade creditor sukuk.

“We are now a debt-free company,” Lootah told reporters at the time. “It was a challenging period we went through, but we managed to meet our commitments.”

Read: Dubai’s Nakheel says it is now a ‘debt-free’ company

Although it returned to profitability, Nakheel, whose projects include the Palm Jumeirah and Deira Islands, reported an annual profit of Dhs4.38bn in 2018, down from Dhs5.67bn in 2017.

It has focussed in recent years on increasing annual recurring revenues from retail, leasing and hospitality, in addition to its core residential portfolio.

Nakheel’s portfolio includes 19 retail projects with a combined 17 million sqft of leasable space; 18 hotels, resorts and serviced apartments with a total of 6,600 keys and 24 clubs and restaurants in Dubai.

The company’s retail, hospitality and leasing businesses generated revenues of Dhs2.5bn in 2018.