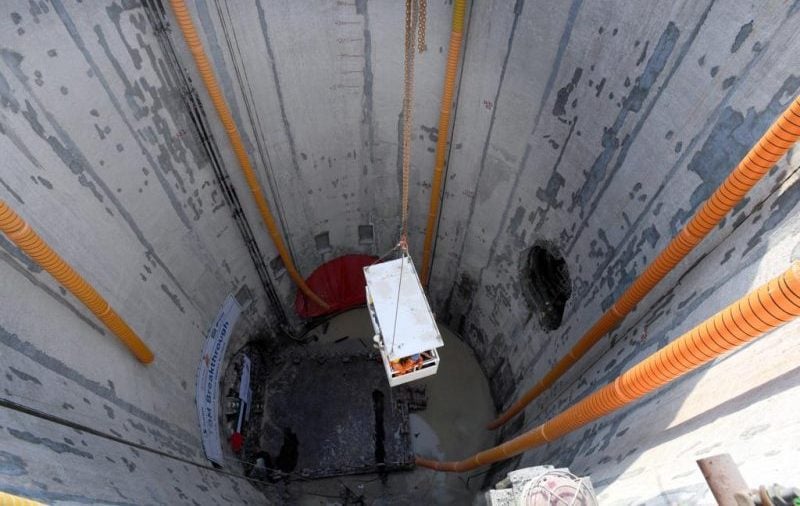 Dubai’s Dhs2.5bn deep tunnel project to drain rainwater in the Airport City and Expo 2020 areas will be ready by September next year, a month before the expo begins, the Dubai Municipality has confirmed.

The project, the first of its kind in the Middle East and “one of the most prominent specialised tunnels in the world” is now 65 per cent complete.

The site works are on 24 hours a day, seven days a week, with a total of four million man hours spent so far. Two giant drilling machines, which are the largest in the Middle East region, are also being used.

Dawood Al Hajiri, Director General of Dubai Municipality inspects work progress at the deep water tunnel project which is on track for September 2020 completion. 65% of the work is completed during 4 million hours. #Dubai pic.twitter.com/yBgEzirdYz

Fahd Al Awadhi, director of Drainage Projects Department at Dubai Municipality, said the giant drilling machine reached the 8th intersection on Sheikh Zayed Road, where it will be extracted, dismantled and reassembled to move to the 7th intersection to begin the final stage of drilling the tunnel.

It is expected to reach the pumping station, located in the reclaimed land opposite Dubai World Ports at the sea, early next year, he said.

Overall, the project has a length of 10.5km, which serves an area of 490 km including the Expo area.

“The work continues on two tasks, the first tunnel, which has reached about 4.5 km so far, and the second task will be the construction of the main pumping station, in a parallel system,” explained Al Awadhi.

“The three final foundation stages will see the use of about 55,000 cement pieces in the tunnel, each weighing two tonnes, along with the installation of 4,400 huge metal rings, ensuring the immunity and strength of the deep tunnel,” he added.

Dawood Al Hajiri, Director General of Dubai Municipality inspects work progress at the deep water tunnel project which is on track for September 2020 completion. 65% of the work is completed during 4 million hours. #Dubai pic.twitter.com/AV9ZhDE2Bb

Dawoud Al Hajri, director general of the Municipality, said that the project will have a major impact in developing the infrastructure for rainwater or groundwater drainage for the Al Maktoum City area in general and the Expo area and the Airport City in particular.