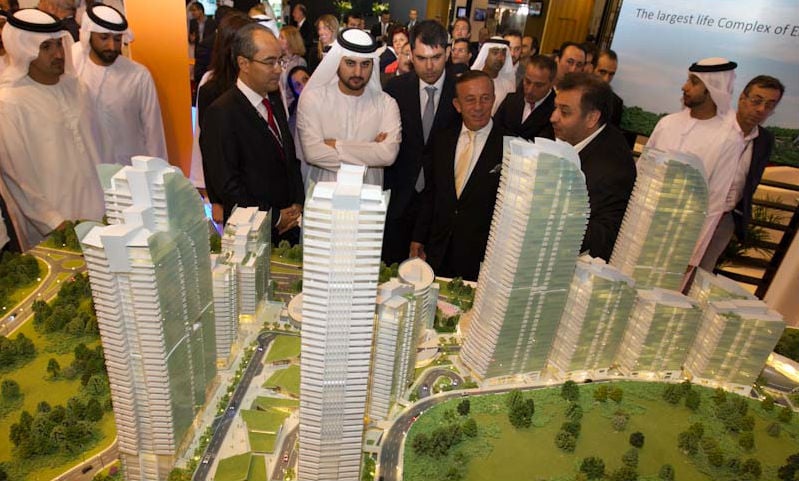 Companies at the glitzy annual property event revived extravagant projects shelved in the aftermath of the market bust, including the Taj Arabia complex, a $1-billion replica of India’s Taj Mahal that includes a 300-room hotel.

“I don’t see why there will be no demand,” said Arun Mehra, a director at builder Link Global. “The Taj is made as a monument of love and we hope to promote this in Dubai as a major wedding destination.”

The mood at the exhibition, which attracts property developers and investors from around the region, is at its most upbeat since 2008, just before a bubble in Dubai’s real estate market burst and sent prices plunging 60 per cent.

The emirate has restructured billions in debt since 2009 and seen its trade and tourism sectors benefit from its safe-haven status during the Arab Spring political unrest in the region.

But while the property sector has recovered in pockets of the city with prices rising, the market is still grappling with a glut of oversupply.

“We see a momentum and the market is improving. Developers are more wise now and banks are much more mature,” said Mohammed al-Shaibani, the deputy chairman of Dubai’s Supreme Fiscal Committee who was tasked with resolving the emirate’s debt mess.

Among projects launched at Cityscape was the Meydan Tower, the largest new project by a Dubai developer since the property market collapsed four years ago. The tower is part of state-owned Meydan’s ongoing $3.8 billion residential development project, which includes man-made canals, lagoons and horse-riding trails, and will be financed through pre-sales.

Meydan is home to a racecourse and hotel development that hosts the world’s richest horse race with a $10 million purse.

Developer Nakheel, whose extravagant projects helped trigger Dubai’s 2009 debt crisis and which has written off about $21 billion from its portfolio since the crash, pitched its third new project this year.

“If there’s no demand we would have not launched the project,” Nakheel Chairman Ali Rashid Lootah said at the launch. “The best sign is that property worth Dhs880 million ($239.59 million) sold in the first day of sales.”

Industry watchers say such images suggest the excesses of the past, when speculative investors flooded into the market, could return.

“You have to look at these launches and how quickly these units have been sold out and realise that there’s again some speculative buying,” said Matthew Green, head of research at consultancy CBRE, which forecasts another 49,000 homes will come on the market by 2015.

“This is a bit scary considering what the market has seen before.”

For potential buyers, there is more choice at Cityscape after three bleak years when few or no new projects were announced by cash-strapped developers. But investors are wary after the bust left some with neither property nor money after builders cancelled projects, or went under.

“People won’t buy easily. It all depends on what rules and laws are set up for the safety of investors,” said Roy Simon, who has bought property in the emirate.