Dubai-Based QE2 Liner Not To Be Scrapped - Gulf Business 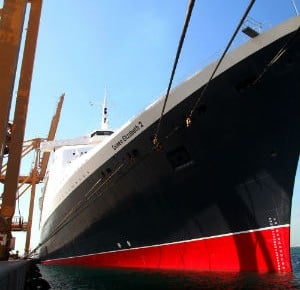 The world famous Queen Elizabeth II (QE2) liner, docked in Dubai, will not be sold for scrap, according to its former owner, Cunard Line.

UK media reports had claimed on Monday that the liner, which was bought by Dubai investment firm Istithmar for around $100 million in 2007, was to be sold to a Chinese firm for scrap for an undisclosed price.

But in a statement on its Facebook page, Cunard Line, the previous owner of QE2 said: “We have noted the messages of understandable concern with regards to the recent article in the Daily Mail with reference to QE2.

“We remain in close contact with Dubai and can reassure you that to the very best of our knowledge this story is pure speculation – one of a number of stories and rumours as we have seen over recent months. Our best advice would be to ignore the story.”

Istithmar had initially planned to turn the ship into a 1,000-room luxury hotel and moor her off the tip of Palm Jumeirah, but in July this year, the company announced that the 293 metre long liner, docked at Port Rashid, would be relaunched as a 300-room hotel.

Launched by Britain’s Queen Elizabeth more than 40 years ago, QE2 was operated for nearly 30 years by Cunard. It made its last voyage from the UK to Dubai in 2008.