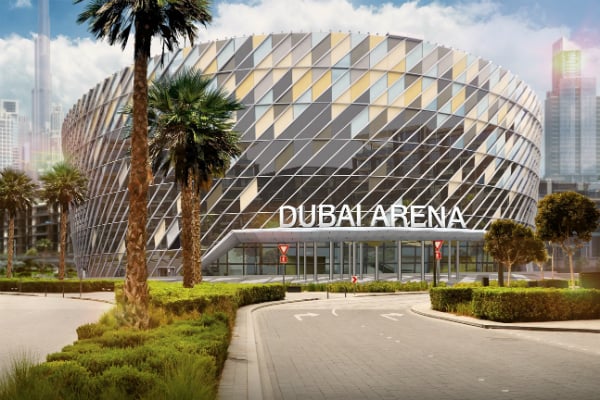 Façade work at indoor event venue Dubai Arena has been completed as it prepares to open in the City Walk area next year.

Developer Meraas said work on external infrastructure and landscaping, including parking spaces, was now underway as the finishing touches are made to the first of the arena’s 46 hospitality suites.

Seating is also being installed and a lighting and sound system will be fitted from next month.

The venue, first announced in late 2016, is expected to be watertight before the end of the year to allow acoustic checks to take place.

When finished, it will have the capacity to host 17,000 people for events including concerts, basketball, boxing, volleyball, ice hockey and gala dinners, exhibitions, conferences and festivals.

“We are confident that Dubai Arena will position the city on the international entertainment touring circuit and the audiences will have the opportunity to witness the world’s most talented performers and sporting events in the heart of Dubai,” said Meraas group chairman Abdulla Al Habbai.

“Dubai Arena will also ensure Meraas and its partners are in a strong position to be able to continue setting new benchmarks in leisure and entertainment regionally, while contributing to the emirate’s continued development as a major tourism destination and boosting the city’s appeal as a place to live, work and visit among residents and tourists.”

With a capacity to accommodate 17,000 visitors, the venue will be able to host many events and genres all year-round. Located at City Walk, #Dubai Arena was designed to host end-stage, central and half-stage concerts, and sporting events. pic.twitter.com/iJtK1nvRQJ

The roof of the venue weighs around 4,000 tonnes and is supported by two mega-trusses that required some of the world’s biggest cranes to install.

More than 110 tonnes of show and production equipment will be placed in viewing areas and air conditioning provider Empower will soon begin tunnelling workers under Sheikh Zayed road to connect 3,600 tonnes of chilled water.

When it officially opens the venue will be managed by international operator AEG Ogden, whose portfolio includes The O2 in London, STAPLES Centre in Los Angeles, the Mercedes-Benz Arena in Shanghai and Qudos Bank Arena in Sydney.