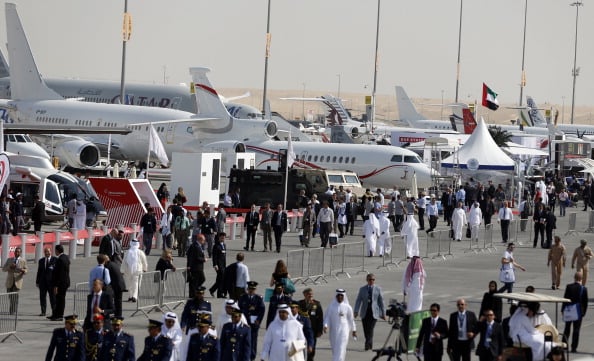 The biennial Dubai Airshow 2015 is gearing up for take-off on November 8 and already it is planning a bigger show in 2017.

Speaking at a press conference today, Dubai Aviation Engineering Projects CEO Suzanne Al Anani said it is considering adding another 10,000sqm at the Dubai World Central (DWC) site “if there is demand”.

This year will see 1,100 exhibitors, ranging from “first timers to industry stalwarts” – Taiwan, Morocco and Latvia are making their show debuts – and new features include a 3D Print Pavilion and the inclusion of the newly formed UAE Space Agency. Up to 65,000 trade visitors are due to attend the week-long industry event.

Last week it was reported that Emirates is not planning major orders and it is hard to envisage that this year will see a repeat of the multi-billion-dollar orders placed with Airbus and Boeing from Gulf carriers two years ago.

Show organisers F&E Aerospace’s managing director Michele van Akelijen said the Airshow “isn’t only about orders” but product launches, new innovations and platform for latest technologies – and the inclusion of space, an industry now worth $300bn, and 3D printing are cases in point. Over 20,000 parts that have been 3D printed out of plastics are currently being used on Boeing aircraft.

Dubai Civil Aviation Authority’s director general HE Mohammed Ahli said invitations have been sent to all countries but no Iranian carrier registrations have been recorded so far. That may be a different scenario in 2017 should sanctions be lifted next year and the widely anticipated regeneration of Iran’s aviation industry materialise.

The static and flying displays will feature more than 160 aircraft including the Boeing P-8 military jet, Qatar Executive G650ER and Emirates A380. In an airshow first, UAVs (drones) will also take part in the flying display.

Dubai Airports CEO Paul Griffiths said airlines tend to be “conservative” in their planning but added that flydubai’s imminent arrival with 71 flights a week will give DWC a fresh boost.

Al Anani said there will be a “major but not total relocation” of flydubai flights in 2017. The passenger terminal capacity is being expanded from 5m to 26m passengers a year.