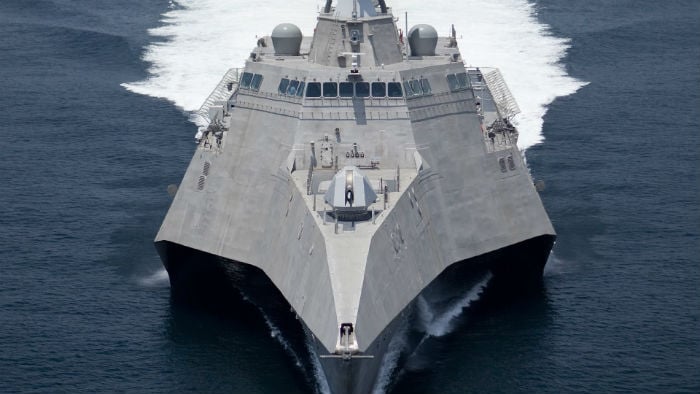 Lockheed Martin Corp expects news about a multibillion dollar programme to modernise the Saudi Arabian Navy in the next several months, senior company executives told Reuters at the Dubai Airshow on Wednesday after meetings with Saudi officials.

“We’re hopeful in the next several months that some clarity will present itself on how they want to go forward on what hull, what design, and what mission equipment,” said Patrick Dewar, executive vice president of Lockheed Martin International.

“We understand the new Saudi deputy defence minister is doing his own assessment on how they should go forward,” Dewar said. “We’ve had good meetings with them here at the show as well as in the (Saudi) Kingdom over the last couple of months.”

U.S. executives and government delegates said they had not seen any signs of a chill in U.S. ties to Saudi military officials after Saudi intelligence chief Prince Bandar bin Sultan last month said the Kingdom was hoping to make a major shift away from the United States.

Saudi Arabia is continuing to evaluate a range of options for the naval modernisation programme, including purchases of up to 12 of Lockheed’s steel monohull Littoral Combat Ship (LCS) or the larger DDG-51 destroyer built by General Dynamics Corp, executives said.

The number of ships would depend on whether Saudi Arabia opted for the smaller or larger of the hull forms, they said.

The Saudi Naval Expansion Program II, or SNEP programme, has been under discussion for years, but U.S. industry and government officials say the effort has picked up some fresh momentum in recent months. Earlier estimates had put the value of the programme at around $20 billion.

He said no decisions had been made on the programme.

Paul Lemmo, Lockheed senior vice president for corporate strategy and business development, told Reuters in a separate interview at the air show that the LCS ship was one of the options still being evaluated by Saudi Arabia.

The USS Freedom, the first LCS ship built by Lockheed, this week picked up supplies in Brunei and joined the relief effort in the Philippines after completing a deployment in Singapore.

The U.S. Navy had planned to buy 52 of the faster, more agile warships, but may scale back that order due to mounting budget pressures, which makes any possible foreign orders that much more important for Lockheed.

Australia’s Austal builds a different aluminium-hulled trimaran version of the LCS ship, but the Saudi government is not looking at possible purchases of that model at this time, U.S. officials said.

The U.S. LCS ships were designed to carry interchangeable mission packages or “modules” for the Navy, but Lemmo said Saudi Arabia and other potential foreign buyers all wanted permanent weapons capabilities built into the ship.

He said Lockheed had proposed outfitting the ship with a lighter version of the Aegis combat system that would carry vertical missile launchers and the Aegis SPY-1F radar that Norway installed on five frigates for Norway.

That is a smaller radar with less range than the Lockheed SPY-1D radar that is installed on the DDG-51 destroyers built by General Dynamics.

Lemmo said Saudi was still evaluating if it needed larger ships that could carry the large missile defence system, or a larger number of smaller, multi-mission ships.

He said the smaller LCS ships could be outfitted with vertical launch systems that could fire smaller missiles, including the SM-2 missiles.