Dubai and Abu Dhabi have climbed several places in a ranking of the most expensive cities in the world for expats by consulting firm Mercer.

In the company’s cost of living report, Dubai climbed two places from last year to 21st while Abu Dhabi ranked 25th from 33rd.

The strength of the dollar also saw cities in the United States climb the list, while others experiencing currency weakness dropped places.

The 2016 list was topped by Hong Kong, Luanda, Zurich, Singapore and Tokyo. 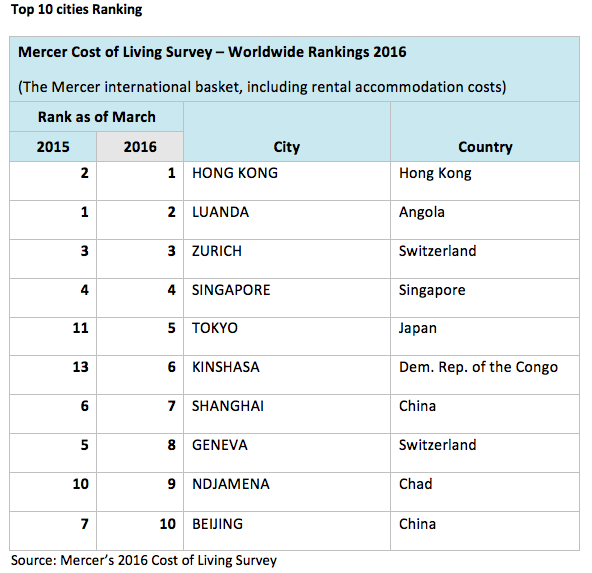 “The main reason Dubai and Abu Dhabi, and in fact almost all cities in the Middle East increased in rank, is that their currencies are pegged to the US Dollar, with Riyadh for instance currently rated more expensive than Rome,” said Mercer Middle East talent mobility consultant Rob Thissen.

“What this means is that once again, cities in our region have become more expensive to send people to, with expatriates expecting increased cost of living and housing allowances.”

Mercer noted that several cities in the region were pushed up by cost of living declines in other locations and expat rental cost increases, despite having cheaper prices for some goods and services than European cities.

The ranking compares day-to-day expenditure on goods and services such as food, clothing and transportation as well as rental prices.