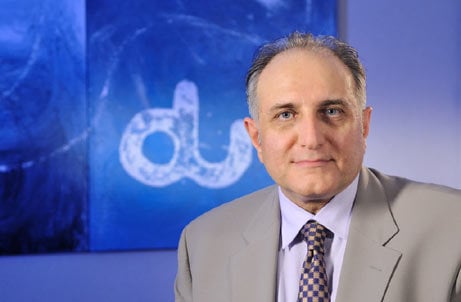 Du, the United Arab Emirates’ second-biggest telecoms operator, remains at odds with rival Etisalat over the terms of a network sharing deal to open up fixed-line services in the country.

Du’s CEO Osman Sultan voiced frustration at the impasse more than four years after talks between the companies began. Both are majority-owned by state-linked institutions.

Du ended Etisalat’s domestic monopoly in 2007 and both offer fixed-line broadband and television packages in the UAE, but not in the same districts, with du confined to newer areas of Dubai.

“It’s clear we are disadvantaged because of the limited geographical zone where we can connect customers. Opening this to the entire nation, it’s clearly a game changer,” Sultan told reporters on a conference call.

The companies have solved technical issues to allow network sharing but remain at odds over the financial terms, Sultan said.

“We should only go with a healthy economic equation and this is why we have a divergent position,” he said.

Nationwide competition in fixed services would also support du’s mobile business because it could offer packages including both to all residents, Sultan said.

“Being able to bundle this properly will become more and more important – this is an important track of growth that we are deprived of today,” said Sultan.

Du made a net profit of Dhs474.3 million ($129.13 million) in the three months to September 30, up 45 per cent from a year earlier, it said on Thursday. This was slightly below an average analyst forecast and a large part of the increase was due to the UAE introducing a more favourable tax regime.

The introduction of mobile number portability by year-end, announced by the telecom regulator this month after a five-year delay, would help du to lure corporate customers, Sultan said.

Du had 6.9 million subscribers as of September 30. Of these, 9.1 per cent were on monthly, or post-paid, contracts. These subscribers typically spend more on telecom services and are less likely to switch provider.

“We have a market share that’s almost at parity but nevertheless our value share does not reflect that,” said Sultan. Number portability could offer “a gain to our advantage on that front”, he added.