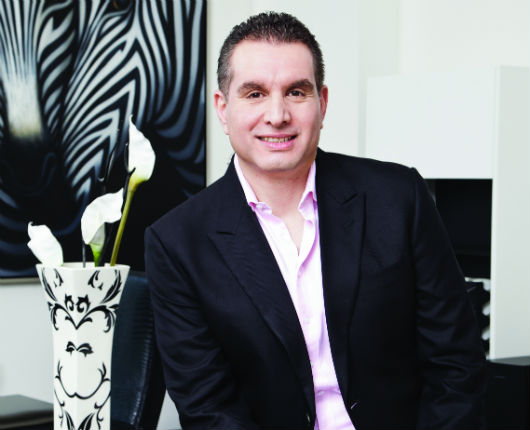 Dr Ahmed Samerai’s calm, unassuming nature belies a wealth of influence in the region. The businessman migrated to Dubai from his native Iraq in 1996. Since then, he has quietly set about building the Sahara Group – a holding company spanning a wide range of sectors including real estate, advisory, public relations and hospitality.

The charismatic chairman likes to spend much of his time with a close group of confidantes in his self-assigned luxury penthouse – one of Sahara’s many properties at the heart of Dubai’s Downtown district. The stunning property is a stone’s throw from the Burj Khalifa and plays host to a constant flow of colourful friends, contacts and business partners.

Dr Samerai doesn’t believe in ever switching off completely. “When I’m not working, I’m checking my mails and responding to them,” he says with typical drollness.

In between bouts of enthusiastically-imbibed shisha Dr Samerai will pause to tell you about his many projects. And they are no ordinary projects.

In the past few years, Samerai has built up the philanthropic arm of his organisation, most recently focusing on his new film production house which has a mission to do good in the region and beyond.

His first movie offering ‘The Story Of One Yellow Bike’ premiered at Dubai Mall’s Reel Cinemas in February. Produced on behalf of The Ahmed Samerai and Ben Stiller (yes, Hollywood star Ben Stiller) Foundation, the short film tells the story of how the pair donated 1,500 bicycles to Uganda and calls on Dubai residents to donate their old bikes to Africa.

Samerai says: “The goal for NGO Bicycles For Humanity is to supply 5,000 bicycles per year to rural areas in the country. In the fight against poverty many people do not consider mobility, but there are many advantages: children can get an education because their 20-kilometre commute to school is now manageable; local farmers can carry their produce and go to the city markets; women can more frequently visit the city’s clinics for treatment, and learn how to keep their families healthy. It is of vital importance.”

Next in the movie pipeline is a world-first documentary covering the taboo topic of male breast cancer in the Arab world, as well as a movie promoting “sports and peace”.

It is Samerai himself who funds the movies, marketing efforts, and his foundation. Last year The Samerai Foundation supported 12 to 15 charities, including Friends of Cancer Patients, which saw a contribution in the range of $100,000.

Samerai says: “The philanthropic sector is still guided by the UAE’s corporate world. We still need to involve or communities, families and friends to work for the good of humanity.”

On a business level, the doctor says he has been busy snapping up more property.

“There were quite a few good bargains in the real estate market until the last quarter of 2013. In my opinion, a clear parameter in terms of Dubai real estate pricing is yet to be determined.

“While some properties are undervalued such as Downtown Dubai, others are most certainly overvalued when compared to major cities in the world. For now, everything is going up regardless of any selling point.”

With his fingers in so many local pies, it’s clear that Samerai won’t be leaving Dubai anytime soon. The last 18 years have seen the doctor carve a unique path in the emirate and he has no plans to hang up his hat just yet.

He says: “You need to have a dream – not only is it free and easy to dream, but it will naturally lead you to create a notion of how things can be really beautiful. The second most important ingredient for success is setting a target. One should always wake up to achieve a target and reach the next station or level in life.”

VIDEO: Watch The Story of One Yellow Bike