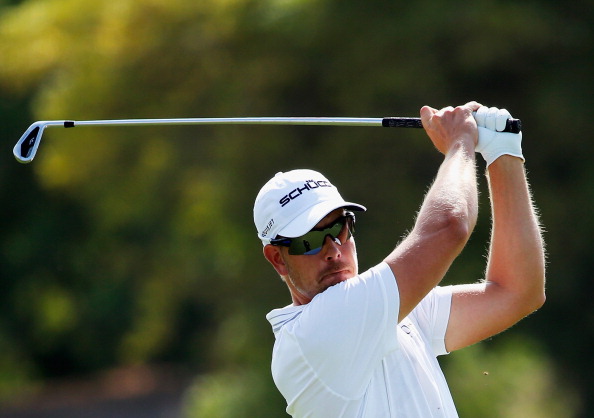 Henrik Stenson fired a five-under 67 in the third round of Dubai’s $8-million DP World Tour Championship on Saturday to retain a one-shot lead, although Ian Poulter – who can pip the Swede to Europe’s money-list title – closed to within four shots.

Stenson can win the Race to Dubai, formerly the European Order of Merit, and a $1-million bonus with victory at the tour’s season finale, as can Poulter if he prevails over 72 holes at the Earth course and Stenson fails to finish in the top two.

“I know the guys are going to try their hardest to attack again on Sunday,” said Stenson. “It’s all about being in position on Sunday afternoon.

“We’ll have to see coming into the back nine, the last three or four, if I need to make any adjustments.”

“I’m right there. I’m hunting,” said Poulter. “If I can get off to a decent start on Sunday, it’s going to be a fun back nine. If I play like I did today, 62 is realistic.”

Sandwiched between them is world number 39 Victor Dubuisson who rattled in 11 birdies as he equalled this year’s best round of 64. The in-form Frenchman, winner of last week’s $7-million Turkish Airlines Open, is on 200, or 16 under, despite making a double-bogey at the par-four 10th.

“I didn’t hole very long putts but I played good between four and 10 feet,” said the 23-year-old. “The last three months I’ve been working very hard on my putting, my short game, the stroke, the way to read the line.”

England’s Justin Rose (68) and Northern Ireland’s Graeme McDowell (68), who could also win the money list with victory in Dubai, are off the pace at 11 and 8 under respectively.

Going into the tournament, Stenson said he was happy to lead from the front and his confidence was apparent as he surged to 12 under after two rounds, five shots clear of his closest rivals for the money list crown.

The Swede was less assured as he began his third round under stifling desert skies, missing presentable birdie chances on the par-four first hole and par-five second, lipping the first – a 10-foot downhill putt – and coming up awry on the other from a similar distance.

The crowd was dotted with Sweden flags and Stenson’s home support hoped for something to cheer after the country’s soccer team lost 1-0 to Portugal in the first leg of their World Cup playoff on Friday.

He obliged on the fifth, landing his second shot within three foot of the pin and he made no mistake from there to pick up his first shot of the day and move to 13 under.

Playing partner Alejandro Canizares started one stroke behind Stenson and drew level with a four-foot birdie on the second but on the fifth the Spaniard sank a three-putt bogey – his first dropped shot since the same hole of the first round – to leave Stenson two shots clear.

“It was a bit of a tough day for me,” said the world number three. “I was probably in-between clubs a few more times and I just didn’t strike it quite as good.”

Poulter, Europe’s Ryder Cup hero in 2012, sank birdies on the opening two holes and bogeyed the par-three fourth before picking up further shots at holes five and seven.

He made four more birdies on the back nine, although another par-three bogey on the 17th blotted his scorecard.

“I need to make up ground. I’m being overly aggressive and it’s going to catch you a couple of times but hopefully being aggressive I can take my fair share of birdie putts,” added Poulter, 37.