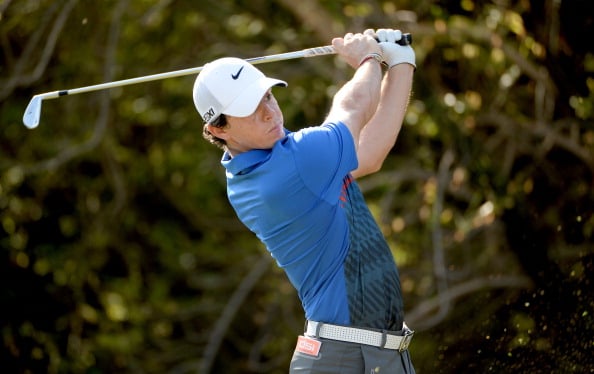 Rory McIlroy, seeking a first win of 2013, began Dubai’s $8 million DP World Tour Championship in blistering fashion but could not sustain the momentum as he fired a one-under 71 on Thursday in the European season climax.

The defending Dubai champion sank birdies in three of the opening four holes on a cloudless morning at the Greg Norman-designed Earth course.

After a 30-foot birdie on the opening par four, a 40-foot eagle attempt came up just short to leave him with a simple birdie at the second and the 24-year-old Northern Irishman picked up another shot on the fourth as girlfriend Caroline Wozniacki looked on.

But bogeys on the fifth and eighth holes stymied McIlroy’s charge, and although he birdied the seventh he dropped another shot after finding the water on the 18th to end on 71, five behind early leader Alejandro Canizares.

“I feel like I played better than the score suggested,” McIlroy told reporters. “I was pretty wasteful on the back nine. I had a good chance at 10, good chances at 14, 15, 16 so there were a few chances out there that I didn’t take. I’m coming off the course disappointed, but I know there’s a good score out there.”

That McIlroy was one of Thursday’s early starters shows how poorly 2013 has gone for him as he began the day a lowly 46th on the Race to Dubai, formerly the European Order of Merit, which he won last year along with the U.S. money list.

The world number six stressed the importance of ending the year strongly to lay the foundations for a better 2014.

“I’ve got three tournaments left, this one and two more, so it would be great to get a win before the end of the season, but just some solid performances going into next year would be great,” he added.

Victory in the DP World Tour Championship for Swede Stenson, McDowell or England’s Rose would also see them clinch the Race to Dubai, as would Poulter and Welshman Jamie Donaldson should they prevail over 72 holes and Stenson finishes third or lower.