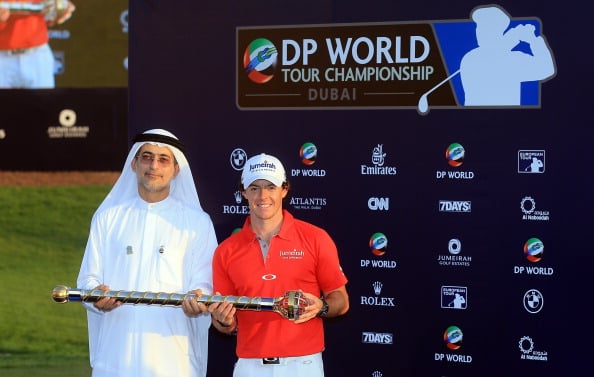 Sweden’s Henrik Stenson is the current leader, despite a barren year in Europe, with England’s Justin Rose and Northern Ireland’s Graeme McDowell – winners of the U.S. Open in 2013 and 2010 respectively – close behind.

Ian Poulter and Wales’ Jamie Donaldson are ranked fourth and fifth in the Race to Dubai, formerly the European Order of Merit, and each could still win if they prevail in Dubai and Stenson finishes third or lower. There are myriad other permutations depending on how the leader board shakes up.

“I think it’s very important to be in the lead,” Stenson told reporters. “It’s always nice to have that cushion.”

The 37-year-old said his victory in the U.S. Tour Championship in September, where he became the first European winner after going into the final round in Atlanta four shots ahead, would stand him in good stead to lead from the front again in Dubai.

“I’ve done well in big moments throughout my career,” added Stenson, whose Dubai preparations have been hampered by a niggling wrist injury. “It’s all down to focusing on your game, playing the best you can and not caring too much about what’s going on around you.”

Whoever ultimately triumphs, the Tour must be delighted the Race to Dubai will be decided at the season’s final event following Rory McIlroy’s romp last year.

The Northern Irishman had the Merit title sewn up nearly two weeks before teeing off in Dubai, but the 24-year-old has found this year tougher going, slipping to sixth in the world rankings after starting 2013 as number one.

McIlroy won last year’s Dubai event, his most recent title, and believes he can mount a decent defence, even if he is a lowly 46th on the money list.

“If I can drive the ball well and drive it long and straight, it gives me a huge advantage over most of the field,” said McIlroy. “It’s something that when I’m on my game I can really take advantage of and I was able to do that last year. This is a perfect golf course for that.”

Although fans should relish an exciting finale, the Tour’s inaugural season-ending series has drawn the ire of some players, with South Africans Ernie Els and Charl Schwartzel skipping Dubai in protest at a requirement to play in two of the preceding three events – two in China and the Turkish Open – to make the entry list.

The four-tournament series, which offers combined prize money of around $30 million, is a similar format to U.S. PGA Tour’s end-of-season FedExCup.

“The European Tour should be granted some time to get this thing right,” said McDowell. “The two from three was designed to try and get the best fields possible for the three weeks. It doesn’t suit everyone. The premise is right. It’s only a matter of time before it’s close to perfect.”

The world number 11 has never made the top-10 at Dubai’s Greg Norman-designed Earth course, but will not allow past disappointments to affect him come Thursday’s tee-off.

“The course is firmer and faster this year, which I think is going to suit me,” said McDowell.

“It’s just a case of getting my head around the very coarse grain on these greens and reading them better. It’s not like this golf course is too long for me. It will come down to my short game and putting.”

Rose, winner of the European Order of Merit in 2007, found the greens soft in practice.

“Long hitters have prevailed here, there’s no doubt,” said the world number five. “But if the fairways are running firmer, that brings the par fives into range for probably a greater percentage of the field, which will make a difference.”

Englishman Poulter took five weeks off from mid-September; a decision the 37-year-old believes should place him among the favourites to prevail in Dubai.

“I’ve still got plenty in the tank,” he said. “The fitness work that I did in that off period is working. I would expect myself to be there right to the end on Sunday.”