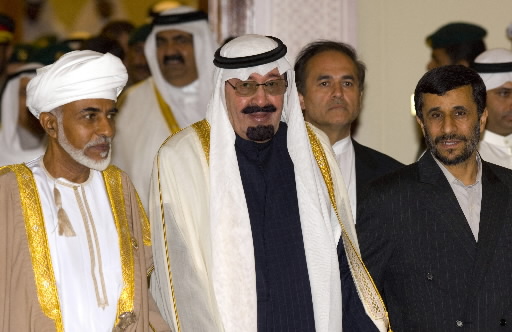 Traditionally reticent Oman has become unusually assertive in opposing a Saudi plan for Gulf Arab states to close ranks against Iran, worried that a wider regional confrontation might threaten its own stability.

Oman’s willingness to incur the displeasure of Saudi Arabia, its most powerful neighbour, reflects both the proximity of Iran and vulnerabilities of its domestic political, economic and religious makeup.

The Sultanate sits on the Strait of Hormuz, the narrow waterway between Iran and the Arabian Peninsula through which flows 40 per cent of the world’s seaborne crude oil. Muscat has a history of constructive relations with Tehran, and recently agreed to buy Iranian gas for the next quarter century.

“Geography necessitates that we deal with Iran. It is a Muslim neighbour located on the other side of the Gulf and therefore we must seek stability in this region,” said Anwar al-Rawas, a lecturer at Sultan Qaboos University in Muscat.

Oman has watched with alarm as rivalry between Sunni Muslim Saudi Arabia and Shi’ite Iran has spread across the region. Riyadh and some other members of the Gulf Cooperation Council (GCC), of which Oman is a member, believe Tehran is using sectarianism to interfere in Arab countries and build its own sphere of Middle East influence.

Riyadh has backed groups opposing Iranian proxies in unrest or outright war in Syria, Lebanon, Iraq, Bahrain and Yemen, and has tried to marshal the GCC into what a former Omani diplomat described as “a sectarian project to confront Iran”.

Muscat not only dismissed the Saudi idea last month, but also facilitated secret U.S. talks with Tehran, leading to a deal on Iran’s nuclear programme that Riyadh sees as dangerous.

Factors in the new diplomatic assertiveness of a government that used to be discreet even by the standards of the tight-lipped region also include the sultanate’s religious makeup, which is very different from its Arab allies’, and wariness among many Omanis of Saudi influence. “They might be a bit worried about being crushed by the sheer weight of Saudi Arabia,” said a Western diplomat in Muscat.

Omani concerns also stem from uncertainty over its dynastic succession and questions about how long an economic model built on dwindling oil production can last.

Protests in several Omani cities during the Arab Spring in 2011 showed that public patience with the government of Sultan Qaboos, credited with rapidly modernising a medieval Kingdom after he overthrew his father in 1970, has limits.

Saudi Arabia’s population and economy are larger than those of the other five GCC members put together. Viewed from Oman, Riyadh’s attempts to build a unified Gulf Arab position are overbearing and against its economic and political interests.

Although differences were rarely aired in public, Oman has long stood out among its Gulf allies.

While other GCC countries gave money and political support to Iraqi President Saddam Hussein in his 1980-88 war with Iran, Oman maintained relations with Tehran and helped to mediate a ceasefire that ended the fighting.

Oman also arranged prisoner exchanges between Tehran and the West, and helped to organise oil payments to the Islamic republic as it struggled with international sanctions imposed over its nuclear programme.

This was partly in return for Iranian help with putting down a Marxist uprising against Qaboos in the 1970s, even though it was the Shah who sent troops to Oman, rather than leaders of the 1979 revolution that overthrew him.

“Qaboos is forever grateful to Iran for that,” said Abdulkhaleq Abdulla, an analyst in the United Arab Emirates.

Muscat officials remain keen to conciliate. “They consider any role they can play in calming down the situation in the region, in creating a kind of bridge between countries, is indeed in the interest of Oman,” said Valeri.

Oman’s religious makeup also lies behind its unease at the sectarian nature of Gulf politics. Most Omanis including the Sultan adhere to the Ibadi faith, a Muslim branch unique to the country which has much in common with mainstream Sunni Islam.

A big Sunni minority and a smaller Shi’ite community are not at odds with the Ibadi majority, and Muscat is keen to keep it that way. Already some Omanis and foreign diplomats say the influence of Saudi Arabia’s conservative Wahhabi school of Islam sometimes causes friction.

“From time to time, we see Wahhabi sheikhs on Saudi television channels brand Ibadis as heretics and that doesn’t go down very nicely,” said Saif al-Maskery, a former Omani diplomat who held a senior GCC role from 1987-93. Sectarian gestures from Iranian Shi’ites were a problem too, he said.

All this is happening as Oman faces a long-term fall in oil revenue, public anger about unemployment and corruption, and worries about the political future.

Qaboos, 73, has no children or designated successor. Omanis are not yet confident in the state institutions, such as an elected parliament with few real powers, that he has slowly built.

Since the protests in 2011, Qaboos has accelerated efforts to strengthen political institutions and is pursuing a high-profile anti-corruption campaign, with trials of some senior executives and former officials on bribery charges.

The government has also taken steps to bolster employment at home, ordering a pay increase for Omanis and announcing new curbs on recruiting foreign workers.

In the long term the country recognises it must diversify away from oil and expand trade outside the GCC, including with Iran. After the Arab Spring, the GCC pledged $10 billion in aid to Oman. However, this will mostly be used on joint projects such as a railway stretching from Oman through the United Arab Emirates and Saudi Arabia to Kuwait.

Trade with Iran is now estimated at a modest $250 million a year, but in August Muscat signed a 25-year deal with Tehran to import gas, worth around $60 billion over its lifetime.

This, together with a $16 billion project to develop Oman’s own gas reserves signed with BP this month, should help to relieve bottlenecks in infrastructure and industrial projects.

It also shows the benefits to Oman of pursuing a conciliatory policy, and its worries that the political considerations of Saudi Arabia may not be in the Sultanate’s long-term interests.

“Oman joined the GCC as part of its concern for regional stability,” Maskery said. “Neither the Omani people nor its leadership will agree to be dissolved in a larger entity.”