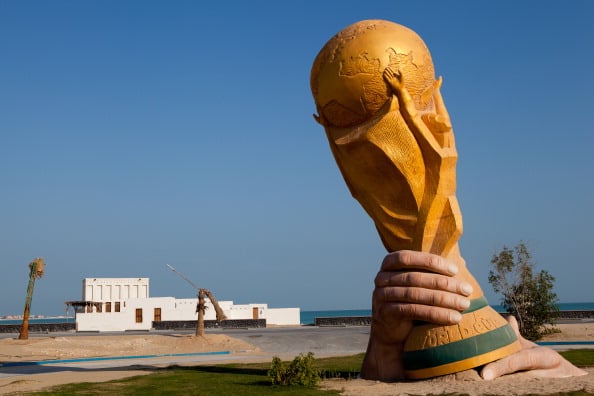 A German television team reporting on Qatar 2022 World Cup preparations was arrested and questioned by the authorities who prevented it from leaving for five days, broadcaster WDR said.

Qatar said the team did not have a permit to film, adding that any media organisation wishing to film required such authorisation, as was common in many countries. WDR said in a statement its team had tried for weeks to obtain such a permit.

Reporter Florian Bauer as well as a cameraman and a sound engineer were detained as they filmed migrant workers in the capital Doha, WDR said, adding they were held for 14 hours and interrogated by state officials.

“They were not allowed to leave Qatar for five days until the foreign minister approved their exit,” WDR said. “Their camera equipment, notebooks and personal cell phones were confiscated and only returned four weeks later. All data was deleted and parts of the equipment damaged.”

Conditions for construction workers in Qatar came under the spotlight when Britain’s Guardian newspaper reported in September 2013 that dozens of Nepali workers had died during the summer and that they were not given enough food and water.

Qatar denied the Guardian’s findings, but the International Monetary Fund said the issue “could affect the availability and cost of hiring new workers in the future”.

FIFA president Sepp Blatter has said Qatar must do more to protect those working on 2022 sites.

Qatar in July 2014 approved some improvements to its treatment of migrant workers, including a requirement that firms set up bank accounts for workers, pay wages electronically and a ban on mid-day outdoor work in the summer heat.

Officials were reported by Qatari newspapers on Wednesday as saying the country would build seven “cities” to house more than a quarter of a million workers involved in World Cup projects.

The Qatari World Cup event’s organising committee, the Supreme Committee for Delivery and Legacy, said the WDR team had not been arrested because it was reporting on the allegations surrounding the 2022 FIFA World Cup Qatar or FIFA.

“Any media outlet wishing to film in Qatar requires a film permit to do so, as is common in many countries. Any working journalist who has visited Qatar will be aware of this process and understand filming in specific locations without permission runs the risk of legal repercussions.”

In the rankings of countries according to their freedom of press compiled by Reporters without Borders, Qatar ranks in 115th place out of 180 countries.