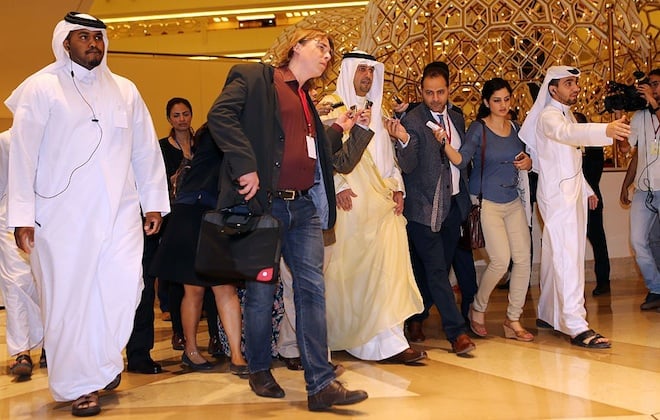 The much-awaited oil-freeze deal expected after a meeting of oil producers in Doha on Sunday failed to materialise, causing a plunge in crude prices and regional stock markets on Monday.

Around 18 oil-exporting nations, including members from the Organisation of Oil Exporting Countries were expected to agree to stabilise output at January levels until October 2016.

However, the accord fell apart after OPEC heavyweight Saudi Arabia demanded that all producers, including Iran, take part in the pact.

Iran, which didn’t attend the meet, has made it clear that it will not cap production as it seeks to boost output post-sanctions.

“We concluded that we all need more time for more consultations and talks,” Qatar’s energy minister Mohammed al-Sada told reporters.

Oil prices, which had rallied by more than 60 per cent from January lows on prospects that an agreement to freeze production will be reached, crashed on Monday.

Brent crude futures fell almost 7 per cent in early trading on Monday with prices currently at around $40 per barrel.

“The burden will also be felt in all major financial assets, including equities, fixed income, and FX markets,” said chief market strategist at FXTM Hussein Sayed.

“Will be looking for stocks to fall across the globe on Monday, yields on sovereign debt to decline, and emerging and commodity market currencies to tumble.”

Morgan Stanley said that the failed deal “underscores the poor state of OPEC relations,” adding that “we now see a growing risk of higher OPEC supply.”

In a note on Monday, managing partner of Gulf Intelligence in Doha Sean Evers opined that there are five key takeaways from the collapse of the Doha discussion.

2. Iran is focused on rebuilding Iran and not seeking approval from OPEC colleagues

5. OPEC picks up the deflated oil ball and will try to inject some oxygen into rebuilding fractured harmony within the bloc ahead of a June meeting