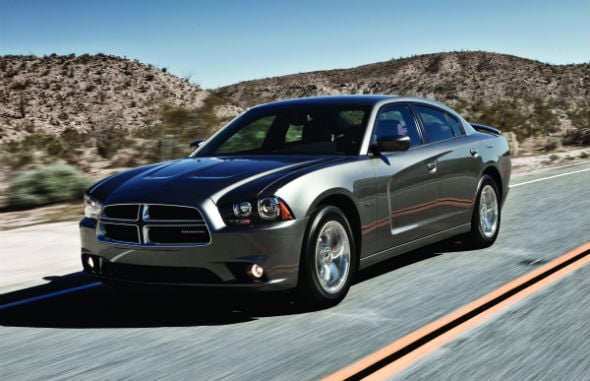 For an American muscle car that looks likes it hits the gym more regularly than a body builder, there’s a few surprising aspects about the 2012 Dodge Charger.

The first is that when you start the engine – after an initial roar – it puts itself straight into an eco-friendly driving mode, enabling lower revs and a more sustainable carbon footprint…I know.

That’s the type of behaviour you expect from a ‘green’ car, not from an American muscle car.

Not from the brand that gave the world the infamous General Lee in the Dukes of Hazard; the dual-striped Viper and Challenger; the countless pick-up trucks that formed the backbone of rural America for the last three decades. Not from Dodge.

The reality is that with a 3.6 litre Pentastar V6 engine, delivering 292 horsepower in the SE and SXT models, even in its ‘Eco’ mode, the Charger is still a beast beneath the bonnet. The 5.7 litre HEMI V8 engine in the R/T model delivers 370 horsepower — good luck thinking about the environment when you accelerate in that.

Another surprise is its handling. As is the way with stereotypes, the legend goes that if it’s an American car it can’t go round corners.

Anyone who’s driven a car made in the States in the last five years will know that label is no longer fair — muscle cars now handle more or less on a par with their European rivals.

And the Charger is no different. The small hint of under steer it does possess feels like it’s been left there intentionally. You don’t want a car like the Charger to go exactly where you point it – you want to work the steering wheel in a bend and be tempted to drift the back end out. It’s supposed to be fun, and the Charger is exactly that.

Its gearbox is another surprising selling point. The state-of-the-art ZF eight-speed automatic transmission is incredibly quick and smooth while Middle East models are equipped with rear-wheel drive, sending all the power to the back.

The car’s safety and modern connectivity aspects are good. The interior feels like it’s missing something others have, a certain luxurious aspect, but 90 per cent of the reason you will buy this car is because of the engine, not the interior.

Thanks to the ‘eco’ mode the car does deliver a best-in-class V6 fuel efficiency, delivering an impressive 31 miles per gallon.

If however saving your money isn’t your number one concern, then there is an option to extract a little more fun from the car at the expense of a greener world.

One easy slip of the gear stick from Eco to its ‘L’ Sport mode – there is no normal ‘Drive’ option — increases the car’s rev limiter and opens up the exhaust, sending all the power to the rear wheels.

It may be labelled ‘L’ but we can only think that stands for ‘Ludicrously Fun’. In a heartbeat you’re Bo Duke, at the wheel of the General Lee.