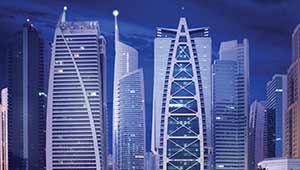 This brings the total number of companies operating at the largest free zone in the UAE to more than 8,865, a 30 per cent increase from the first half of last year.

“DMCC continues to attract members at an unprecedented rate and we are proud of the ever increasing contribution to Dubai’s overall economy. By driving foreign direct investment we will ensure Dubai remains the regional and international trade and tourism hub,” said Ahmed Bin Sulayem, executive chairman, DMCC.

DMCC also recently announced a major expansion with the building of the ‘Burj 2020 District’ with the world’s tallest commercial tower, ‘Burj 2020’ as its centrepiece, with ground-breaking planned in 2015.

The free zone is also bringing to market a 14-floor ‘glass box’ style building, ‘One JLT’, which is being constructed in the heart of the free zone and is due for completion in 2015. Both projects will cater to the increased demand of large multi-business and multi-national companies.

DMCC also opened the 55,000 square meter JLT Community Park in January, making it the largest park of its kind in New Dubai.

The free zone has also seen strong growth in commodities trading. In the first five months of the year, trade volumes of rough diamonds increased by 13 per cent to 63 million carats. The Dubai Diamond Exchange (DDE), a DMCC platform also hosted the first tender of Zimbabwe rough diamonds held in Dubai in March and a further 11 diamond tenders, which included goods from countries such as Zimbabwe, Angola, South Africa, Guyana, Russia and DRC.