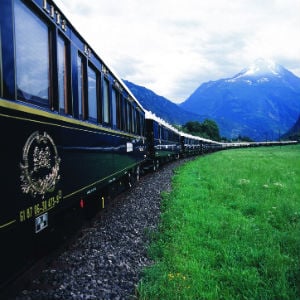 Loud music hit us as we arrived at Istanbul’s Sirkeci railway station. A janissary band in vivid red and gold uniforms was creating a welcoming din on the platform. Inside a huge, high-ceilinged waiting room, unchanged since it was built in 1890, my wife and I checked-in and deposited our luggage. We were offered glasses of tea but we were keen to get to the platform.

There it stood. Immaculate is hardly the word. In its polished navy blue, gold and white livery, the new Venice Simplon-Orient- Express (VSOE) is the most cherished train in the world. At the door to every carriage stood bright-faced young men in blue and gold uniforms ready to help passengers on board, although most of their time was taken up being photographed. A lot of locals had turned out to see this legendary train on its visit to Istanbul.

We found our compartment. Like all the carriages that run on this annual journey, it was an original from the 1920s and wonderfully restored. In the 1970s the VSOE company tracked down rolling stock across Europe and rebuilt them, recreating in exact detail all the brass and leather fittings, the marquetry, mahogany and lacquer decorations. It’s like taking your seat in a film set. Each compartment had a small sink discreetly hidden behind the panelling and the fitted sofa converted into bunk beds. We discovered this was always done while guests were at dinner. That faint smell of woodsmoke turned out to be the original wood- burning boilers that provided our hot water, hidden at the end of each carriage.

There was a bucket of iced champagne waiting in our compartment so we settled ourselves for the afternoon journey out of Istanbul. What we hadn’t expected was the attention that this train receives. The VSOE runs regularly from Calais to Venice and now has routes heading up through Germany in the direction of Russia but the annual journey from Istanbul to Venice is the star route. People lined the tracks and waved from railway bridges as we left Istanbul. As we passed through fields of sunflowers and sheep, locals clustered at the tiny stations. On the Bulgarian border the station master got out his trumpet and played as the Orient Express trundled through.

And we were just as excited. We were in a mobile five-star hotel, eating well and about to get a unique perspective on Turkey, Bulgaria, Romania, Hungary, Austria and Italy. It was time to get dressed for dinner and listen to the pianist in the bar. Yes, the train really does have its own grand piano and resident pianist!