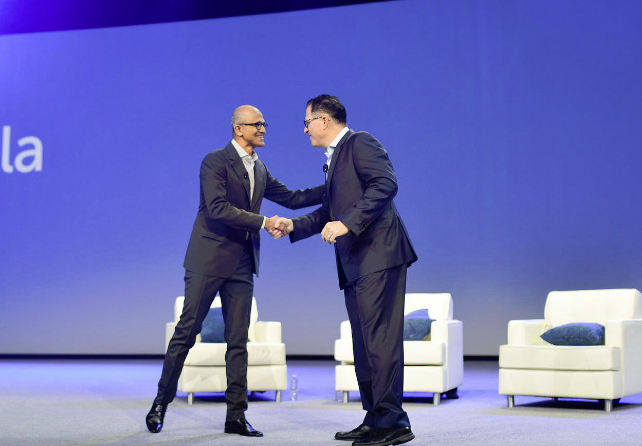 ‘The Future is Now’ were the words on everybody’s lips at this year’s Dell World conference. The US computer giant stands on the brink of sealing the biggest tech deal in history as it prepares to acquire data storage hardware company EMC for $67bn. If accepted by the shareholders, the deal could catapult Dell away from its waning personal computer legacy into a mega player within the enterprise technology field.

The most prized asset or ‘crown jewel’ in the deal is the cloud and virtualization software provider VMware, of which EMC owns an 80 per cent stake. Other assets in EMC’s loose federations of companies are security firm RSA, cloud technology firm Virtustream and big data analysis specialist Pivotal. However, the merger will not only bring the complications of handling three stocked market-listed entities- chief executive Michael Dell famously took his company private in 2013 – but will also create a staggering amount of debt. The acquisition also presents a polar opposite strategy to Dell’s biggest rival, Hewlett Packard, which has split itself into two separate companies. Speaking to Gulf Business during the three-day conference in Austin, Texas, Dell however dismissed any suggestion that merger was a deliberate attempt at differentiation from his main competition. “From an instinctual standpoint, it doesn’t feel right to develop our strategy from looking at our competitors,” he says. “It just doesn’t feel like a good idea to me. When I develop strategy, what I do is I go talk to customers… There are a lot of things we can do on a combination basis that would have been more difficult as just commercial alliances.”

More than thirty years on from when Dell first began selling computers from his Texas university bedroom, the PC industry has changed a lot. Given the meteoric rise of the smartphone alongside tablets, it is no surprise that the latest Gartner PC figures showed a 7.7 per cent fall in worldwide PC shipments from the previous year. And while Dell’s own sales still saw growth, the move into further digitisation could be Dell’s wild card in the face of an industry on the decline. One venture that is certainly set to be in the spotlight over the coming year is the Internet of Things – an area of which the Middle East could play a major role. Last year, the company founded its 18th solutions centre in Dubai and is now to hire 200 people to work on an IoT project for a major, but as-of-yet undisclosed local healthcare provider. Give there are currently 10 Dell employees in the region – six in Dubai and four in Saudi Arabia – this will be a dramatic boost to operations here. Further development is also like in areas of building automation, oil and gas, power and even hospitality. Plans for an internship programme helping graduates in Saudi Arabia are said to be underway, though Dell was unable to confirm those at this stage.

On the subject of how the merger between Dell and EMC will affect these operations in the Middle East, the bosses have so far remained firmly tight-lipped. However, previous collaboration does point to a somewhat harmonious union; between 2002 and 2010 Dell re-sold EMC’s storage systems throughout the region, operating a $2bn run rate of business. Speaking to Gulf Business, president for Europe, Middle East and Africa Aongus Hegarty says: “I think there is a very good track record of culturally business-wide working together and clearly that’s something we’re going to replicate at the close of the acquisition in any of these markets. We did it very successfully in the Middle East in the past.”

In the past few months, Hegarty has overseen the consolidation of Dell’s Middle East business unit with its Turkey and Africa operations. This merger will now see general manager for MEA and Turkey Driss el Ougmani report directly to Hegarty on the EMEA leadership team. Asked whether the fall in oil prices and its effect of the region’s economy was a factor in the consolidation, Hegarty replies: “I’ll have more focus on [the Middle East]. That’s all that decision is.”

“I agree, in the short-term there are some challenges [with the oil prices],” he adds. “But, I think each of these countries and markets are well used to manage through the upside opportunities as well as some of the downward challenges. But, I think the wider growth across the broader EMEA region is going to continue to grow. And for those start-up Middle Eastern businesses – they need to be focussed on the wider markets and those markets in Europe are growing. There is a lot of opportunity there and that’s why technology allows a company not to be constrained – they can look beyond their individual country.”

Dell meanwhile echoes similar sentiments, saying “I think the good news is that it is pretty easy to build IT systems and place them all over the world. But for a company trying to build a global business, it could not be more expensive; you have to put the data in every single place. But, I think these kind of decisions are mainly the domain of society rather than technology. How will society decide where information should reside? What sort of privacy and security? It is not really for us to decide. We work within the rules that exist, whatever they are.”

And despite being in the industry for more than 30 years, Dell’s drive shows no signs of abating – in fact if anything, the EMC merger seems to ignited an enthusiasm of start-up graduate as opposed to t a seasoned veteran. “If you told me I couldn’t do this, I’d be depressed,” he says. “I like doing the stuff. I am tremendously excited about the role that technology has in changing the world…I look at what has happened in the last 30 years, there has been a lot of progress in the world; you read about a lot about bad things in the world, but there has actually been a tremendous amount of progress.

“And to me it mirrors the rise of the micro-processor, and somebody in Africa for $30 can hold a device in their hands and have more information than the president of the United States had 25 years ago, and it is amazing. The availability of information and how that changes the world, to me is exciting. So I get to have a front row seat in that and get be involved. It is a lot of fun.”